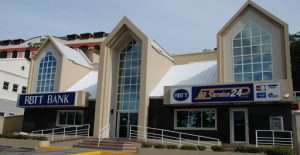 PR – RBC Financial Caribbean Limited officially communicated to the Grenada Technical and Allied Workers Union (GTAWU) that it had entered into a definitive Agreement on December 11, 2019 for the sale of its banking operations in the Eastern Caribbean which includes RBTT Grenada Limited.

The Union and the Bank were unable to resolve the matter of the RBTT Grenada Workers having the options as contained under Sections 45 (1) & (2) of the Grenada Employment relative to the aspect of Successor Employer and other benefits enjoyed by the workers under the Collective Labour Agreement. The Union have always argued that the workers have the right to exercise the option to either be terminated and receive termination allowance or continue with the new owners.

The matters were heard by the Labour Commissioner, Mr. Cyrus Griffith who ruled that the workers of RBTT Grenada Limited are entitled to exercise the option to decide whether they wish to be terminated and receive termination allowance or continue with the new owners.

On the issue of Profit Sharing the Labour Commissioner observed that Article 25 of the Memorandum of Agreement obligates the payment of a share of the profits to the employees.