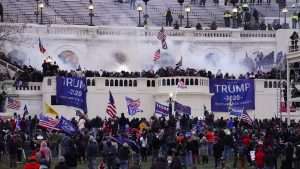 (AP) — US President Donald Trump has become the first American president to be impeached twice, facing a strong bipartisan rebuke from the House exactly one week after a violent mob of his supporters invaded the US Capitol.

The House voted 232-197 to impeach Trump, with 10 Republicans joining with Democrats to charge him with incitement of insurrection.

The extraordinary second impeachment, just days before Trump is to leave office, comes after the president encouraged his supporters to “fight like hell” against the election results in a speech near the White House.

House Speaker Nancy Pelosi will now send the article of impeachment to the Senate, though that timing is unclear. Actual removal seems unlikely before the January 20 inauguration of President-elect Joe Biden, as Senate Majority Leader Mitch McConnell has said he will not bring the Senate back before January 19.

Still, McConnell did not rule out voting to convict Trump. In a note to his fellow Republican senators just before the House was to begin voting, he said he is undecided.