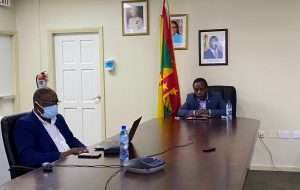 PR – Prime Minister, Dr. the Right Honourable Keith Mitchell on Tuesday attended the 13th Special Emergency Meeting of the Conference of Heads of Government  of the Caribbean Community.

The meeting discussed among other things, access to COVID-19 vaccines for CARICOM  member states. A statement on this is expected from CARICOM.

Another topic of discussion was the border dispute between Guyana and Venezuela. In  a statement issued Tuesday afternoon, CARICOM expressed deep disappointment and  concern with recent statements by Venezuela and voiced “full support of the judicial  process underway at the International Court of Justice (ICJ) which is intended to bring a  peaceful and definitive end to the long-standing controversy between the two countries.”

The statement also reiterated CARICOM’s “firm and unswerving support for the  maintenance and preservation of the sovereignty and territorial integrity of Guyana.”