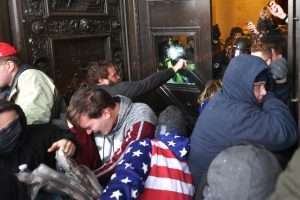 (NEW YORK POST) – Armed protests are expected at all 50 state capitols plus the US Capitol, from this week through Inauguration Day, a new FBI memo reportedly warns.

The ominous internal bulletin was circulated less than a week after hordes of supporters of President Trump stormed the US Capitol in a bloody attempt to stop Congress’ certification of Joe Biden’s election win, leaving five people including a police officer dead.

“The FBI received information about an identified armed group intending to travel to Washington, DC on 16 January,” the bulletin, a copy of which was obtained by ABC News, reads in part.

“They have warned that if Congress attempts to remove POTUS via the 25th Amendment, a huge uprising will occur.”

The alert refers to attempts — Democrat-led, but with some GOP support — to convince Vice President Mike Pence to oust Trump by invoking the 25th Amendment.

The bulletin additionally warns of armed demonstrations at the US Capitol, all 50 state capitols, courthouses and government office buildings across the nation, according to ABC.

In the wake of last week’s assault on the US Capitol, authorities have arrested and charged dozens of alleged participants in a still-ongoing manhunt.