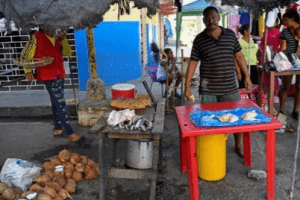 (AFP) – It is a short trip by sea from the once-prosperous port town of Guiria in northeast Venezuela to the Caribbean island of Trinidad and Tobago.

But in the past two years, the 80-kilometer (50-mile) stretch has become a watery grave for more than 100 residents of the state of Sucre and its capital, Guiria, a city of 40,000 people.

Many perished while fleeing Venezuela’s floundering economy and political turmoil, hoping to find a new life, while others were making the treacherous journey simply to buy food.

Just last month, almost 30 people drowned when their boat — which had space for eight passengers but left Guiria with 41, according to authorities — sunk in the Gulf of Paria.

Many had gone to stock up on flour, rice, oil and other essentials that have become scarce and prohibitively expensive in Venezuela, after three years of hyperinflation and a seven-year recession.

“They were going to buy food so that we would not have to worry over Christmas,” said Julio Pottella, a 51-year-old mechanic who lost two nephews in the latest tragedy to shake the community, where clandestine journeys to Trinidad and Tobago have become a part of life.

Jose Carlos San Vicente Pottella, 30, and Noelvis Astudillo, 29, are among those whose bodies were pulled from the water days after fishermen spotted the wreckage and alerted authorities.

The authorities said 29 people died, but family members put the number at 34.

“They had planned to send the food (home) in containers… they were going to buy 10 bags of flour, five bags of rice, three to four bullets (20-litre containers) of oil, and four or five boxes of chicken,” Pottella told AFP.

“It’s cheaper to buy there, even with the freight costs… and the food is better,” he said.

Product prices in Venezuela, already battered by the highest inflation in the world, are even more out of reach in remote areas such as Guiria, some 640 kilometers east of Caracas.

Matters are further worsened by roads in poor condition, a chronic shortage of fuel and officials demanding bribes along the routes usually taken to purchase goods in the capital and other cities.

“For many Guiria merchants it is more profitable to buy Trinidadian products than Venezuelan ones,” said Kevin, a 37-year-old trader who mans a market stall because his pinched profits do not allow him to rent a shop.

He said buying chicken in Trinidad today works out to a dollar per kilogram — less than half the price in Venezuela.

A bag of onions is four times more expensive in Caracas than across the gulf, where a ferry that used to cross fortnightly has long since ceased to operate.

The limited legal travel options available have been curtailed by restrictions imposed due to the Covid-19 epidemic, leaving no transportation except smugglers or fly-by-night boat operators.

The United Nations estimates that more than five million Venezuelans have left the country since the end of 2015.

Most have stayed in the region, with an estimated 1.4 million going to Colombia and 860,000 to Peru, says the International Organization for Migration (IOM).

“Refugees and migrants compelled to leave Venezuela use diverse routes to reach their destination including by land, plane and sea, sometimes putting their lives at risk,” says the IOM.

“More people are taking sea routes than in years prior too – taking short maritime routes toward neighboring Caribbean islands… Many leave without documents to cross borders. They face great risks at the hands of smugglers and traffickers.”

Pottella is angered by the “bad situation” in his home country that has obliged so many to risk their lives.

He has a son living in Trinidad and family members scattered across several countries, almost all of them “illegals,” as he describes them.

Pottella invites AFP to “take a good look at me” as an example of the hardships ordinary Venezuelans face.

“This is hell in the guise of a village.”