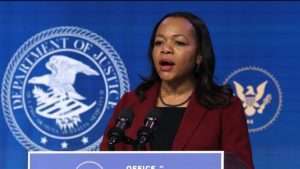 In a national television address, Biden named Kristen Clarke, the daughter of Jamaican immigrants, who grew up in Brooklyn, New York, as assistant attorney general for civil rights.

If confirmed by the US Senate, Clarke will lead the DOJ’s Civil Rights Division.

Biden said Clarke “has also spent her career advocating for greater equity in the justice system”.

“A daughter of Jamaican immigrants, Kristen is also one of the most distinguished civil rights attorneys in America,” said Biden, adding that Clarke, “a proud native of Brooklyn,” began her legal career in “the very same office she is now nominated to lead”.

Biden said Clarke’s previous tenure with the Justice Department “saw her take on some of the most complex civil rights cases — from voting rights and re-districting challenges to prosecuting hate crimes and human trafficking”.

“She has earned accolades throughout her career — including as the head of the Civil Rights Bureau for her home state of New York, where she led the charge to end the school-to-prison pipeline and root out discrimination in housing and law enforcement,” he said.

“She currently leads one of the nation’s top civil rights organisations, where she promotes greater equity in voting rights, in our education system, our housing system, our justice system, and so much more,” he added. “Now, she will return full circle to pursue that vital work where her career began.”