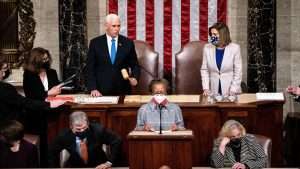 (AFP)- Outgoing US President Donald Trump on Thursday offered the clearest signal yet that he will voluntarily leave office on January 20, saying there will be an “orderly transition” to Joe Biden’s presidency.

“Even though I totally disagree with the outcome of the election, and the facts bear me out, nevertheless there will be an orderly transition on January 20th,” Trump said in a statement minutes after the US Congress formally certified Biden’s victory.

“While this represents the end of the greatest first term in presidential history, it’s only the beginning of our fight to Make America Great Again,” he added, hinting at a potential 2024 run.

The statement was the first time Trump formally acknowledged his loss after spending the last two months refusing to concede and lobbing baseless allegations of widespread voter fraud, even though his own Justice Department, federal courts and state governments have said repeatedly the vote was carried out freely and fairly.

Trump’s refusal to accept reality and his incendiary rhetoric reached a breaking point Wednesday when his supporters violently occupied the Capitol in one of the most jarring scenes ever to unfold in a seat of American political power. Authorities said four people died during the violence, including one woman who was shot by an officer outside the House chamber.

Trump had encouraged his supporters to march on the Capitol to protest lawmakers’ actions, and later appeared to excuse the violent occupation by the mob, which forced its way inside and clashed with police.

Trump spent much of Wednesday afternoon watching the insurrection on television from his private dining room off the Oval Office. But aside from sparing appeals for calm issued at the insistence of his staff, he was largely disengaged. Instead, a White House official said, most of Trump’s attention was consumed by his ire at Vice President Mike Pence, who defied Trump’s demands by acknowledging he did not have the power to unilaterally choose the next president. The official was not authorised to discuss the matter and spoke only on the condition of anonymity.

Lawmakers were resolved to complete the Electoral College tally in a display to the country, and the world, of the nation’s enduring commitment to uphold the will of the voters and the peaceful transfer of power. They pushed through the night with tensions high and the nation’s capital on alert.