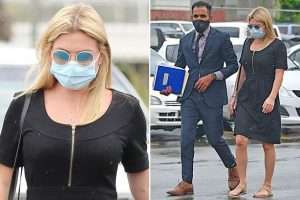 Chief Magistrate Ian Weekes initially handed down a fine of $12 000 to be paid in seven days or nine months for breaching quarantine. If the money is not paid, Weekes said, a warrant for her arrest will be issued through Interpol.

Holland arrived in Barbados to stay at Hilton Barbados, but was placed in quarantine at Sugar Bay Hotel. She was caught at the Grantley Adams International Airport attempting to flee the island on December 29, 2020.

After leaving the court, attorney Harry Husbands said they accepted the terms and issued a public apology on behalf of his client, who did not answer any questions. (Nation News)