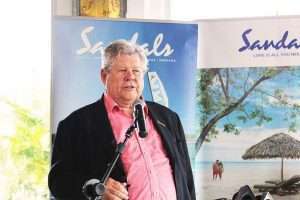 (CMC)— The Caribbean Hotel and Tourism Association (CHTA) has extended condolences to the immediate family of Gordon “Butch” Stewart and thousands of extended family members in the Sandals organisation.

In a statement on Tuesday following news of his death, the CHTA said that the regional tourism industry will be “forever indebted to Butch for his continued passion for excellence and legendary Caribbean hospitality.”

“His vision has bestowed to the global industry a Caribbean organization that adheres to the highest standards of excellence, celebrates and promotes the region’s uniqueness, and invests in the development of our people and communities.”

Stewart, was one of the first recipients of the Caribbean Hotelier of the Year distinction.

The organisation noted that he was a great supporter of the CHTA “and an inspiration to so many of us in the region.”

“Let us preserve and build upon his legacy by continuing to support the development of our industry.”

The Prime Minister of St Lucia, Allen Chastanet says that ‘Butch’ Stewart was never an ordinary man, “a trailblazer ” for this region and for the islands in which he invested was transformative.

“He dreamed big, he thought big, he acted big. He was a visionary, a pioneer and a trailblazer. His son Adam described him as a ‘superhero’ and I concur because what he did for this region as a whole and for the islands in which he invested was transformative,” Chastanet said in a statement.

The Prime Minister noted that as a young Director of Tourism in the nineties, he convinced him to take a chance on St Lucia and he did.

“Three hotels and 2,000 jobs later, the legacy and impact of Sandals is indisputable.”

“No one individual has ever left such an indelible footprint on the Caribbean region or been more responsible for the development of the ‘Caribbean’ brand.

“Butch Stewart was a marketing and branding genius, creating the first world-class Caribbean brand with his Sandals product. His quest for bigger and better led to the unprecedented growth of his hotel chain and global recognition of the Sandals brand.”

Chastanet’s remarks came several hours after the announcement of Stewart’s death in the United States where he was undergoing treatment for an undisclosed ailment.

The St Lucia Prime Minister who in the 90’s worked as Marketing Director of Air Jamaica, which operated under the Chairmanship of Stewart, noted, “I have lost a former boss from my airline days, a mentor and more importantly, a close friend but the Caribbean has lost an irreplaceable icon.”

He contended that many working directly and indirectly in tourism may not attribute their careers to him, but they most certainly have benefited from all that he did to develop the industry.

Chastanet noted that in spite of all his successes and recognition on the global stage, he remained a Jamaican boy at heart, a family man, a lover of all things Caribbean and a tireless advocate for Caribbean people.

“I am forever grateful for the time we had together and I will forever cherish all that I learnt from him.”

“On behalf of the Government and People of Saint Lucia and my own family, I extend heartfelt condolences to the Stewart family and the extended Sandals family,” the Prime Minister noted.