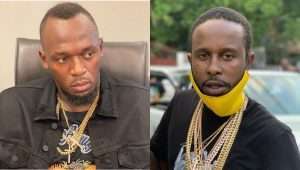 (URBAN ISLANDZ) – Popcaan appears to be calling out Usain Bolt for snubbing local talents for his new single, “Living The Dream.”

Dancehall deejay Popcaan had a strong recommendation for one of dancehall’s newest producers, sprint king Usain Bolt, following the release of “Living The Dream” by Bolt’s friend/manager NJ. According to the 876GUD, the track and field world record holder should be using his platform to further the career of youths with “wid real musical talent.” Usain Bolt hung up his track shoes some years ago and has been trying his hand and feet at a few other things, music included.

Along with recording at least one soca track himself, he has also spearheaded the release of full projects via his own label. He has worked with many of the industry’s biggest names, including Vybz Kartel, Masicka, Dexta Daps, Demarco, among others. Popcaan and Usain Bolt have not yet collaborated, but there is also no record of bad blood between the two talents, and fans are hoping it stays that way following Popcaan’s comment below a post of the sprinter promoting new music from NJ.

“Wid all due respect legend, me feel like you fi just help up some youth wid real musical talent!!!! them deyya nuff,” said wrote Popcaan. He mentioned that he has no problems with NJ, however, he feels that Bolt’s influence could definitely be used to uplift persons who are less fortunate. “Nj a me fam but please just give some hungry youth wey actually have talent tha platform dey. Happy new year,” ended Popcaan.

The OVO Sound Signee came up through the ranks of the Vybz Kartel-led Portmore Empire, honing his craft to ultimately become of the biggest acts out of Jamaica. Many feel that his extensive list of international collaborations definitely gives him the right to speak on these matters, but not everyone is of the view that it should have been a public discussion.

“a very f**ked up statement to make publicly. I’m sure he can work with NJ while giving other yutes a chance,” came one comment below Popcaan’s. “The business is big enough to share. Same way dem used to bash Bolt seh him big and slow…..your song is on point ” never give up.” The song is ok. It’s better than many songs from established artistes. If you love music, master your craft and get a Grammy mek some man gweh!”

Popcaan’s backers also made their voices heard in the comment section. One person said, “yuh Neva sehh a betta ting papii??? @usainbolt yuh waah duu athletics, football and music ?? Richness affi uu alone. As much as how we share the same last name, I 100% agree with @popcaanmusic.”

Some critics of Popcaan’s comment questioned his work in the dancehall as it relates to putting other talents on. Unruly fans issued names such as Jafrass, Quada, Dre Island, and Frachess One as a counter to that argument. The Unruly Boss conducted an interview with Hot 97’s Ebro In The Morning some months ago where he mentioned that he is currently working on a project which will involve all the members of his Unruly Camp. There is still little information surrounding when that project will arrive.

Usain Bolt has not responded to the comment, but Urban Islandz will keep you updated on this story if it develops. For now, you can check out the full discussion below Usain Bolt’s upload.