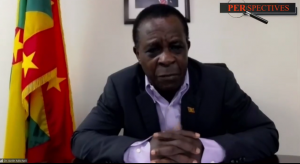 (PR) – Prime Minister and Minister for National Security, Dr. the Right  Honourable Keith Mitchell has welcomed the appointment of Grenada’s first female  Attorney General, Dia Forrester and the confirmation of Edvin Martin to the position of Commissioner of Police.

In an interview on the MTV programme, Perspectives, Dr. Mitchell said both individuals  have demonstrated a high level of professionalism and he is confident of their ability to  serve adequately in their respective capacities.

Speaking specifically about the new Attorney General, Dia Forrester, who previously  served as the Solicitor General, Dr. Mitchell said the feedback from people in the legal  profession, staff in the Ministry of Legal Affairs and others in the public service with whom  she interacted, is that she is a well-respected professional.

He said, “She is deemed to be a professionally strong person and is well-poised to give  guidance to the Government in the area of legal affairs. She has demonstrated  considerable honesty and integrity that is certainly what we want in the office of the  Attorney General. We are extremely lucky to have her, she is young and has the right  energy for the job. In my own interaction with her, I have found her to be very honest and  straightforward, not one for political games.”

The Prime Minister commended the work of the outgoing Attorney General, Darshan  Ramdhani whom he said provided tremendous support to the Government and wished  him well in his return to private practice.

With respect to the confirmation of the Commissioner of Police, Dr. Mitchell said, “He has acted for a reasonable period of time and has demonstrated the required level of  professionalism. I believe the Commissioner must be independent because the person is  responsible for protecting all of the citizens in the country, irrespective of their religious  and political views and other social considerations. So far, Commissioner Martin has  demonstrated that type of behaviour and attitude. Therefore in my view, the Public  Service Commission did the right thing by confirming him in that position to give some  certainty to the leadership of the police force, which is a critical area of national security.”