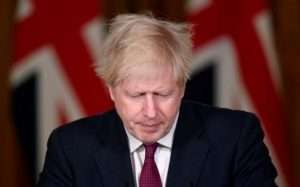 (BBC) – Everyone in England must stay at home except for permitted reasons during a new coronavirus lockdown beginning at midnight, Boris Johnson has announced.

All schools and colleges will close to most pupils and switch to remote learning until the middle of February.

In a televised address, the PM urged people to follow the rules immediately amid surging cases and patient numbers.

He said those in the top four priority groups would receive a first vaccine dose by mid-February.

Speaking from Downing Street, Mr Johnson said the weeks ahead would be the “hardest yet”.

But he added that he believed the country was entering “the last phase of the struggle”.

Scotland earlier issued a stay-at-home order and joined Wales in closing classrooms for most pupils.

On Monday, the UK recorded more than 50,000 new confirmed COVID-19 cases for the seventh day in a row.

A further 58,784 cases and an additional 407 deaths within 28 days of a positive test result were reported, though deaths in Scotland were not recorded.

Those who are clinically extremely vulnerable will be contacted by letter and should now shield once more, Mr Johnson said.

Support and childcare bubbles will continue under the new measures – and people can meet one person from another household for outdoor exercise.

The government has published a 22-page document outlining the new rules in detail.

They warned of a “material risk of healthcare services being overwhelmed” in several areas over the next 21 days.

Level five means the NHS may soon be unable to handle a further sustained rise in cases, the medical officers said in a joint statement.

NHS Providers, which represents health service trusts, said hospitals were at a “critical point” and that “immediate and decisive action” was needed.

A new variant – first identified in Kent and since seen across the UK and other parts of the world – has been found to spread much more easily than earlier variants.