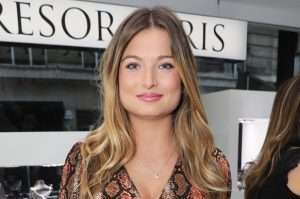 (NEW YORK POST) – Zara Holland, a “Love Island” star and Miss Great Britain 2015, has been arrested while trying to leave Barbados with her boyfriend after he tested positive for the coronavirus, according to a report.

The 25-year-old beauty and her beau, Elliott Love, were caught when they allegedly tried to board a plane to the UK to avoid being taken to a quarantine facility, the Sun reported.

The lovebirds — who had planned to celebrate the new year on the Caribbean getaway — could be slapped with criminal charges including endangering the lives of others and fines, according to the outlet.

If convicted, they could end up spending up to a year in the slammer, it added.

Holland and Love were tested when they arrived on the island Sunday afternoon and ordered to isolate in their hotel room to await the results.

When Love’s result came back positive Tuesday, the couple was given red wristbands and told they would be taken to a military base that has been converted into a quarantine center, the Sun reported.

But before health officials arrived in protective gear to take them to the facility, Holland and Love cut off their wristbands, booked a flight and dashed to the airport in a taxi, according to the outlet.

A staffer at their upscale Sugar Bay Barbados resort reportedly spotted their discarded bands and alerted police, who collared the duo at the airport security checkpoint.

They were being held in a COVID-19 ward at St. Lucy Hospital.

Holland, who was stripped of her beauty crown after “Love Island” aired footage of her performing oral sex under the covers on a fellow contestant, now runs a fashion boutique with her mother.

“There are three tourists who are of special interest. Two are in quarantine and one in police custody,” he told the Sun. “Two were apprehended at the airport. This is a police matter and I trust that the appropriate evidence will be submitted.”