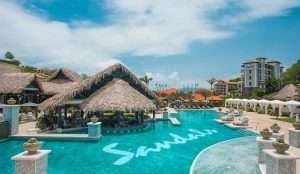 PR – We notice once more that Sandals Grenada has been labeled as the source of a number of COVID infections in a press conference hosted the Minister of Health Nickolas Steele and the Chief Medical Officer, and once more we have seen NO conclusive evidence presented by either gentleman who continue to draw our brand into disrepute.

Minister Steele has claimed that there is an ongoing investigation in response to questions from a journalist who referred to a ‘Sandals breach’. Not only did the Minister not seek to correct the reference to a perceived ‘breach’ by Sandals, but further perpetuated the allegation. In fact in Minister Steele’s response to the reporter, he acknowledged that an investigation was ongoing ‘from day one’ – yet it was on ‘day one’ – without having conducted any contact tracing and with no concrete evidence – that Minister Steele and the CMO declared at a press briefing that the infection originated at Sandals Grenada.

How could they have drawn such a conclusion at that point? We wish to remind the Minister that it was Sandals Grenada, as part of our protocols, that invited the Ministry of Health to conduct random testing in the first place, which we paid for.

In any event, we have never been officially notified or asked to participate in any investigation that is ongoing; indeed, we have not been contacted by the Minister since a Zoom meeting of December 16th. Yet it seems we have been tried and judged without getting the opportunity to be part of the investigation.

What were the parameters used if any at all?

We have a simple question for the Minister, where in the world does it say that numbers alone are what are used to determine or identify the source of an infection? In any event, according to the ‘numbers’ provided by his own Ministry, of 432 team members retested, 432 have received negative tests. 45 affiliates were also retested and 43 of those have also returned negative tests, two are pending. Of the 14 team members referred to as belonging to the original ‘cluster’ to date all 14 have now also received negative results.

Indeed it is also disingenuous for Minister Steele to insinuate that we have questioned the work of the officials of the Ministry of Health. Rather we thanked the nurses, doctors and lab technicians for the work they have done over the holiday period. In fact it is the Ministry of Health officials themselves who carried out ALL the local testing and re-testing.

As to the CMO’s assertion that because the employees were tested ten days after the first test, and so they had a good chance of clearing the infection because they are young, we want to draw attention to the fact that our General Manager Mr. Peter Fraser was among the first to be tested, and he was born in 1948. Thirty-four of our team members were born on or before 1970.

Minister Steele meantime has also gone on record to talk of new protocols being introduced, however to date we have been provided with no official updated protocols by the Ministry, neither can any such information on updates be found on the Ministry of Health’s website.

Instead Minister Steele’s constant insistence of targeting Sandals, without clear evidence showing that the infection originated at the hotel outside of conjecture over numbers, means that we will not be able to set a fixed date for reopening, particularly since the Minister is now suggesting that the matter might even be taken to the Attorney General. This has created doubt among our 600 team members, the airlines and the wider travel trade, and this can create serious trickle- down issues for the entire hotel sector and ultimately the economy of Grenada.

Our company stands by the efficacy and strength of our Sandals Platinum Protocols of Cleanliness, which at all times incorporates the protocols set by the government of Grenada as they officially become known to us. We equally stand by the ability of our dedicated and highly trained team members who have implemented them effectively and safely. We also again want to thank the employees of the Ministry of Health for the sterling job they have done, under pressure, to conduct the testing and provide the results over this hectic holiday period.