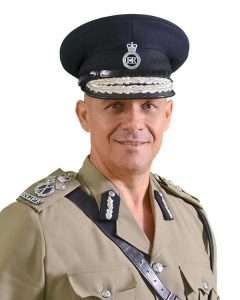 PR – Commissioner of Police, Edvin Martin has  been confirmed to the post of Chief of Police after acting in the position since July 2018.

The Commissioner received his letter of appointment as from the Public Service  Commission (PSC). His appointment is made by the Governor General, on the advice  of the PSC.

Commissioner Martin has 34 years of experience in law enforcement; he was promoted  through the ranks and worked in many departments. He holds a Bachelor’s degree with  honours in Business Administration and a Master of Science degree in Criminology and  Criminal Justice.

Commenting on his confirmation to the post, Commissioner Martin said, “This  appointment is dedicated to awesome, hard-working and dedicated men and women of  the force, through whose work the RGPF maintain a high standard of operation and  positive public image. I am also grateful to the administration for the confidence placed  in me to lead the force at this time. I understand and accept the magnitude of this  responsibility and I vow to execute my duties with diligence, professionalism and  integrity and to constantly give my best to ensure the safety and security of our people  and our nation.”

As Commissioner, he will have command of the police force and will manage the  organisation, administration, discipline, powers and duties of the RGPF, and matters  incidental thereto, as outlined in the Police Act and Police Regulations.