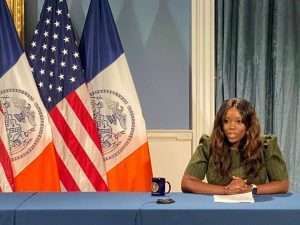 (CMC) — A Haitian American Democratic legislator has strongly denounced two separate shootings in the Caribbean community in the Flatbush section of Brooklyn that killed a 62-year-old Haitian man and wounded an unidentified Caribbean woman, who is listed in stable condition at the Kings County Hospital in the community.

New York City Council Member Farah N Louis, the daughter of Haitian immigrants, said the shootings, which occurred on Saturday, were two and a half hours and about a mile apart.

The assailant, who killed Haitian, Daniel Romulus, has not been identified or apprehended. The same holds for the wounding of the unidentified woman.

The New York Police Department (NYPD) has not confirmed whether the two shootings are related.

“Between the COVID-19 pandemic and prevalence of gun violence, our city is near its breaking point,” Louis, who represents the predominantly Caribbean 45th Council District in Brooklyn, told the Caribbean Media Corporation (CMC). “We have already lost so many relatives, colleagues, and friends this year alone.”

“Instead of spending the holiday season at home among loved ones and counting down to the new year, one family will be planning a funeral while another family hopes for a speedy recovery,” she added. “Our streets are no longer safe, and neither are our homes when there are one or more unidentified suspects terrorising apartment buildings in our community without hesitation.”

“These incidents — related or not — are amoral,” the councilwoman continued. “To break the cycle of violence, we must break our silence to hold these individuals accountable for their actions.”

“I denounce and condemn gun violence, which affects all of us,” Louis said. “I will continue to work closely with the mayor, the Mayor’s Office of Criminal Justice (MOCJ) and Cure Violence groups to address these incidents and demand justice for the victims. “We cannot continue to depend on Congress or the NYPD to take action and stop gun trafficking.”

She said people living in Caribbean and other communities, engulfed in dual health crises, are dying at alarming rates.

“The end begins with us,” Louis said. “Every block of this community belongs to the individuals who sacrificed and fought hard to reclaim it from perpetrators. We have lived here for generations, purchased homes, opened small businesses, and there is no way that we are going backward.

“I pray for healing, peace, and strength for the affected families,” the councilwoman added.