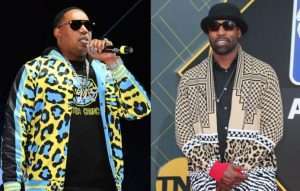 (URBAN ISLANDZ) – Master P wants to turn the Reebok brand into a black-owned company as he and his compatriot ex-NBA All-Star Baron Davis seeks to buy the company from its parent Adidas. News broke on Monday the two men have been interested in buying the company, which has a sales tag of $2.4 billion, as it records massive losses in 2020.

Master P, whose real name is Percy Robert Miller, is a rapper, actor, record producer, and entrepreneur who owns a $200 million fortune, while Davis is a former NBA basketball player and now television sports analyst.

Reebok, which was popular in the 90s and early 2000s, has struggled to keep up with shoe giants like Nike and New Balance. Master P spoke to ESPN regarding the deal “these companies have been benefiting off us, this could be history for this company going black-owned.”

He also told ESPN that the talks to acquire the company have been underway for two months with Adidas and that he and Davis are “prepared financially.” ‘Imagine if Michael Jordan owned Reebok? That’s what I’m talking about making history.”

He also said that the idea of turning the brand into black-owned meant that the community would also benefit. “As we focus on turning Reebok into a lifestyle brand not just a basketball brand, our most important initiative will be put money back into the community that built this company.”

Meanwhile, Davis, who was formerly sponsored by Reebok during his basketball career, said he felt Reebok was undervalued. “I left Nike as a 22-year-old kid representing myself and made the jump to Reebok, which took a chance on me as a creative and as an athlete….I want the people I know athletes, influencers, designers, celebs to sit at the table with me.”

According to the Daily Mail, Adidas acquired Reebok based in Boston for $3.8 billion.

A decision is to be announced in March as to Reeboks’s strategy going forward, even as investors call for the company’s divestment as the company’s net sales dropped 7% in the third quarter of 2020 to $489.40 million, after falling 44% in the preceding quarter. The year 2020 has been devastating for Reebok sales and understandably so due to the coronavirus pandemic.