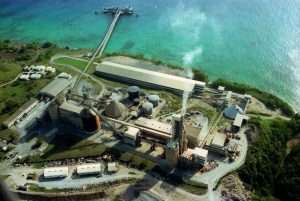 (CMC) — A worker at the Arawak Cement plant, located in the northern parish of St Lucy, died on Monday, following an industrial accident that took place on the weekend.

According to reports, on Sunday at approximately 3:08 (local time) the employees were at the plant attempting to fix a blockage during the cement mixing process, when they were burnt by an extremely hot mixture.

During the manufacturing process, raw materials are heated in a kiln to temperatures as high as 1600 degrees Celsius (2912 degrees Fahrenheit).

One man sustained burns over 90 per cent of his body, while another had burns on his hands and feet. Investigations into the incident are ongoing.

In a brief statement last night, the company confirmed that one of the injured employees passed away, but his identity was not released.