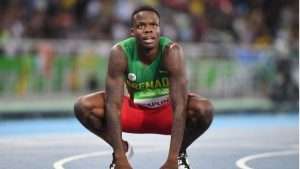 (SPORTS MAX) – Grenadian quarter-miler, Bralon Taplin, has been slapped with additional sanctions by the World Athletics Integrity Unit (AIU), which will now see the athlete banned from competing until 2026.

Taplin, now 28, was handed a four-year ban last year after being charged with intentionally evading sample collection, following his 400m victory at the 2019 Grenada Invitational Athletics Competition.  The athlete was found to have left the stadium without completing doping control.  Taplin appealed the decision, but it was upheld by the Court of Arbitration for Sports (CAS) earlier this year.

The athlete will, however, also now serve a sequential three-years on that sentence, this time for doping whereabouts violations that occurred in 2019.  According to a release issued by the AIU, Taplin was found to have missed tests on the 21st April, August 28th, and 25th of November. Based on the rules, any combination of three missed
tests and/or filing failures within any twelve-month period is considered a violation.   The Grenada Invitational Athletics concluded on the 13th of April.  On each of the occasions, the report claims a tester showed up at Taplin’s residence in Bryan, Texas, USA, and knocked for an hour before leaving having not received a response.

Taplin, through an attorney, later contested the November 25th missed test after pointing out that he had been required to appear in court at the time of the stated test and did not think there was time to adjust the whereabouts form.  After convening a tribunal, the AIU, however, later rejected the explanation provided by the athlete as insufficient.  The new three-year ban will take effect once the athlete has concluded the four-year period of ineligibility.