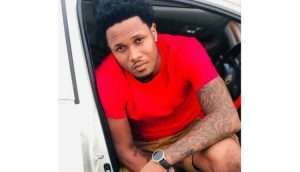 (GUYANA NEWS ROOM) – Police have arrested a man in connection with the death of 29-year-old David Barclay of Triumph, East Coast Demerara (ECD) who was killed at about 02:00 h on Sunday at Durban Street, Lodge, Georgetown.

According to a statement from the Guyana Police Force (GPF), Barclay approached the suspect in a bid to have a tyre on his vehicle repaired.

When the time came to make the payment, an argument ensued during which the suspect took a knife and slashed a tyre on Barclay’s car.

The mother of Barclay’s child was in the car and said he reportedly went to collect an additional $1,000 from her since he was short $700 to pay for fixing the tyre.

Barclay collected the money and reportedly returned to the suspect’s car when he was struck down and dragged some feet away.

However, the suspect, said to be a mechanic, told police that he was in the process of driving off when Barclay jumped onto his right side front door and held on to him, causing him to lose control and crashed into several vehicles which were parked on the street.

Barclay, who was lying motionless on the road, was taken to the Georgetown Public Hospital Corporation where he was pronounced dead on arrival.

The body is at the Hospital’s mortuary awaiting a post mortem.

The incident occurred moments after Barclay celebrated his birthday.