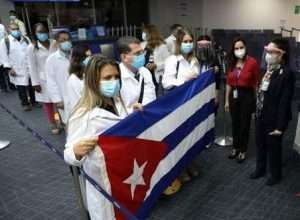 (AFP) — A group of 220 Cuban health care professionals arrived in Panama on Thursday to help fight the coronavirus pandemic despite objections from the United States, Panama’s health ministry said.

The Cuban medics will “reinforce the health system in this fight against COVID-19,” the ministry said on Twitter.

Panama announced o0n December 15 it would hire doctors from Cuba, the US, Mexico, Venezuela and Colombia to tackle the pandemic despite a law restricting medical practice to locals.

Panama is the worst affected country in Central America with more than 220,000 COVID-19 cases and over 3,600 deaths among its 4.2 million population.

“Governments that hire Cuban medical workers must ensure their fair and humane treatment — in stark contrast to the Castro regime, which traffics in, and exploits, the workers’ bravery for its own gains,” Kozak tweeted on December 21.

The US is Panama’s main political and economic ally.

Cuba’s practice of hiring out its world-renowned health care workers has been branded “white coat diplomacy” by Havana’s detractors, including Washington, which has accused Cuba of “forced labor” and using the medics as a propaganda tool.

“Our White Coat Heroes have arrived in Panama,” Cuba’s embassy in Panama said on Twitter alongside a video of people wearing white coats and carrying a Cuban flag.

Since reopening its economy in September and October, Panama has witnessed a spike in coronavirus cases that has left its hospitals saturated and their staff exhausted.

The government has imposed a total lockdown over Christmas and the New Year to try to slow the virus’s spread.

Panama is due to receive 450,000 doses of the Pfizer/BioNTech vaccine during the first quarter of 2021.

Panama President Laurentino Cortizo had announced plans to hire Cuban doctors in August but backed down following criticism from Washington and from within the country.

However, the government was forced into a change of heart as it was unable to hire enough health care professionals to tackle the virus crisis.