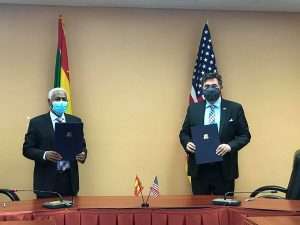 PR – In a ceremony at the Ministry of Works’ conference room on Friday, the United States and  Grenada signed an agreement to consolidate and reschedule certain debts owed to the  United States to support the Government of Grenada to devote those resources to increase  social, health, and economic spending in response to the COVID-19 crisis.

Once in force, the agreement defers until 2022-24 the payment of more than $320,000 in  principal and interest due between May and December 2020 so that Grenada can focus on  immediate pandemic needs. The agreement implements the terms of the Paris Club-G20  Debt Service Suspension Initiative, of which Grenada is a beneficiary.

“Grenada is deeply appreciative of the move by the United States to defer the amounts  owed to that country. We commend their responsiveness to the Debt Service Suspension  Initiative which is crucial to the efforts by our country to redirect resources to mounting an  effective response to the COVID-19 pandemic and to fostering the early stages of  recovery. The effectiveness of our efforts thus far is due in large part to the relief granted  through this debt service arrangement,” Minister Bowen said.

“At a time when so many in Grenada are impacted by the economic effects of COVID-19,  the United States renews its commitment to Grenada and its people,” said Duckworth.  “I’ve seen firsthand how the diminished number of tourists and students, along with the  new COVID cluster, has affected the lives of Grenadians.”

“The United States is leading the effort to combat COVID-19 and its threat to global  health and security,” added Duckworth. “Addressing debt transparency and sustainability  is a priority for the United States to enable the long-term financial stability of Grenada and  other countries as they face the difficult choice of servicing debt or responding to urgent  health and economic needs.”

In April 2020, the United States helped lead the G20’s efforts to establish the Debt Service  Suspension Initiative, which provides a suspension on official bilateral debt service  payments by low-income countries so they can channel savings toward COVID-19  responses. This initiative is creating tangible, rapid benefits for the world’s countries that  need it most.

The Paris Club was formed in 1956 and is an informal group of official creditors whose  role is to find coordinated and sustainable solutions to the payment difficulties experienced  by borrower countries.

The members of the Paris Club are the governments of Australia, Austria, Belgium, Brazil,  Canada, Denmark, Finland, France, Germany, Ireland, Israel, Italy, Japan, the Netherlands,  Norway, the Republic of Korea, the Russian Federation, Spain, Sweden, Switzerland, the  United Kingdom and the United States of America.