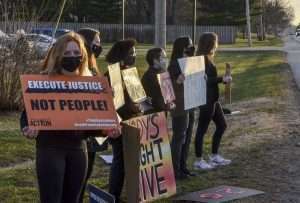 (AP) — A second federal inmate scheduled to be put to death next month in a series of executions by the Trump administration has tested positive for COVID-19, his lawyers said Friday.

The diagnosis of Corey Johnson, who was convicted of killing seven people related to his drug trafficking in Virginia, comes a day after attorneys for Dustin John Higgs confirmed he tested positive at a US prison in Terre Haute, Indiana, where both men are on death row.

Johnson, Higgs and a third inmate, Lisa Montgomery, are scheduled to be put to death by lethal injection at a death chamber at the federal prison complex in Terre Haute just days before President-elect Joe Biden takes office.

Johnson’s lawyers, Donald Salzman and Ronald Tabak, called on federal authorities to strike their client’s current execution date of January 14. Higgs is scheduled to die a day later. Montgomery’s execution date is January 12, but because she is the only woman on federal death row she is currently held at a separate prison for female inmates in Texas but would need to be brought to Indiana to be executed.

Johnson’s attorneys said his infection would make it difficult to interact with him in the critical days leading up to his scheduled execution, adding that “the widespread outbreak on the federal death row only confirms the reckless disregard for the lives and safety of staff, prisoners, and attorneys alike.”

“If the government will not withdraw the execution date, we will ask the courts to intervene,” they said.

The Justice Department and Bureau of Prisons did not immediately respond to requests for comment.

Prosecutors alleged that Johnson was one of three crack cocaine dealers who carried out a string of murders and that he killed seven people in 1992 in an attempt to expand the territory of a Richmond, Virginia, gang and silence informants. His legal team has argued that he is intellectually disabled, with a far-below average IQ, and therefore ineligible for the death penalty.

Higgs was convicted of ordering the 1996 murders of three women in Maryland. Montgomery was convicted of using a rope to strangle a pregnant woman in 2004 and then using a kitchen knife to cut the baby girl from the womb, authorities said. She would be the first woman executed federally in more than half a century.

The Trump administration resumed federal executions after a 17-year pause in July, carrying out 10 death sentences since then, including two last week. It has executed more people in a single year than any other administration in more than 130 years.

The Bureau of Prisons confirmed in a statement to The Associated Press on Thursday that inmates held on federal death row — known as the Special Confinement Unit — have tested positive for COVID-19.

As of Thursday, there were more than 300 inmates with confirmed cases of COVID-19 at FCC Terre Haute. The Bureau of Prisons said “many of these inmates are asymptomatic or exhibiting mild symptoms.”