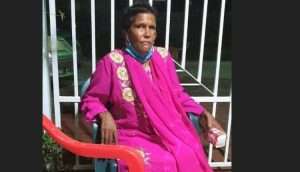 The suspect, Ravindra Ramdeen, was arrested on Thursday after a post mortem revealed that Singh died as a result of manual strangulation compounded by blunt trauma to the head.

Police Commander, Assistant Commissioner, Simon McBean told the News Room that Ramdeen was intensely interrogated after which he confessed that he committed the heinous act because Singh did not want to have sex with him.

Ramdeen, in his alleged confession, claimed that he and Singh shared a relationship. He alleged that at around 21:30h on December 10, he jumped the fence and entered the house via the back veranda with Singh’s permission.

Ramdeen claimed that Singh hit her head on the bed after they engaged in sexual intercourse, however, when he attempted to have sex with her again, she refused and as a result, he strangled her.

Ramdeen said he left her lying motionless on the bed and he went home. The woman’s body was discovered by her relatives the following morning.

Neighbours have been hosting a candlelight vigil for Singh every night since her death.
The News Room understands that the woman was last seen alive Thursday afternoon when she walked around the community to remind everyone that her birthday was in a few days.

Singh did domestic work and relatives also claimed that she was mentally challenged.

Her father, Surujbally Singh, explained that he was in the lower flat of the two-storey house when he heard Singh screaming the night before she was found dead. He said he called out to her and after she did not answer, he thought she was sleeping. Singh lived with her father, brother and other relatives.

Meanwhile, a neighbour and advocate against domestic violence and abuse, Madonna Ghanie, also spoke with the News Room and explained that Singh was reportedly brutally beaten by a relative two months ago. Singh made a report against the relative at the Turkeyen Police Station and had also taken up the matter in the courts.

Ghanie explained that a court hearing was scheduled for December 18.

“She was beaten so badly that she came to me for assistance because she wanted the public to know what she goes through,” Ghanie said.

Ghanie further alleged that after she began helping the woman, the relative in question also threatened her and her family.

“I am the one who took her to the hospital, the police station and court and so on.

“The Thursday afternoon she was telling me that her birthday was Sunday and to see that she is dead the next morning it is very sad,” Ghanie said.

Ghanie said she intends to follow up with the investigation to ensure justice. The advocate also criticised the police for not taking the matter seriously during the initial investigation.

It was only a few days ago that ranks from the Criminal Investigation Department (CID) took over the case and dusted for fingerprints.

“I am on the police case because I want Miss Jean to have justice and tomorrow is her court hearing from the first time she was beaten and I will be at court to hear what is going on,” Ghanie said.

Neighbours have also been hosting a candlelight vigil for Singh every night since her death.