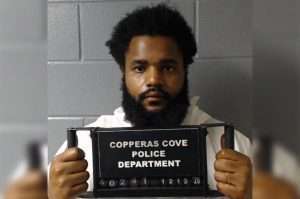 (NEW YORK POST) – A Texas man allegedly stabbed his wife and their two children to death over the weekend, and laid in bed with the three dead bodies, authorities said.

Officers responded to Bryan Richardson’s home in Copperas Cove Saturday night on a welfare check, and found him covered in blood laying next to his dead wife, Kiera, and their two young children, WFTV reported.

Copperas Cove police officers asked Richardson what happened and he responded he didn’t know, according to a criminal complaint obtained by KWTX-TV.

Cops also found a blood-covered kitchen knife on a table, an empty six pack of beer and an empty bottle of prescribed antidepressants, the complaint says.

Officers even saw the family’s dog lying a pool of blood in the kitchen, according to the complaint.

A motive behind the attacks has not been revealed. Richardson has been charged with three counts of murder, and is being jailed on $2.25 million bond.