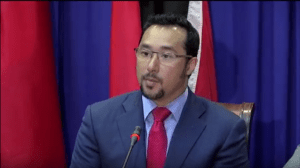 (CMC) — National Security Minister Stuart Young has denied that personnel from the Trinidad and Tobago Coast guard had any involvement in the circumstances surrounding the death of Venezuelan migrants.

According to Venezuelan authorities, on December 6, 20 Venezuelans left on a boat en route to the twin island republic and a few days later, several bodies were found near the Venezuelan coastal town of Guiria.

Speaking during a sitting of the Senate on Tuesday, Young confirmed that more bodies were recovered on the shoreline.

He also sought to dispel rumours that the coast guard was involved in the incident that has been linked to human smuggling.

“We continue to see all sorts of speculation about Trinidad and Tobago’s Coast Guard involvement in this, none of which is true. The available information suggests that this was an incident of human smuggling,” he said.

“This fact seems to be overlooked. Human trafficking and human smuggling are not to be encouraged. It is very sad that once again, the criminal elements involved in human trafficking and smuggling have, through their nefarious activities, caused the loss of lives, and we pray for their families.”

The national security minister said the Government is in constant contact with the Venezuelan authorities through his minister and the Foreign Affairs Ministry.

He reiterated that both Trinidad and Tobago and Venezuela’s borders remain closed at this time and without the requisite permission and authority, migrants would be entering the country illegally.

The UN estimates that more than five million Venezuelans have left their country since 2015 due to the ongoing economic and political crisis, some 25,000 of whom fled to the twin island republic.