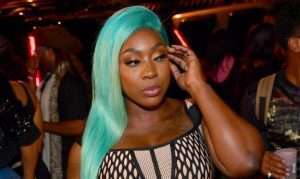 (BUZZ CARIBBEAN) – Mondays usually get a bad rap for being the most mundane day of the week, but last night was the farthest from, as Spice finally addressed claims made by spiritual advisor Nardo ‘RT Boss’ Smith that it was through his services that she attained the “Queen of Dancehall” status.

The deejay declared that she is innocent of any “obeah dealings” and claimed that it was Smith who constantly nudged her to partake in spooky rituals.

“One thing you can’t say I never indulge in your obeah talks nor obeah a soul,” she wrote in an Instagram story. “Mi no work obeah no time at all. A God my thing deh, periodttt. I’m my own prayer warrior and this too shall pass. You can never, ever, ever release a voice note wid mi a speak evil on no one.”

Watch your friends
She played part of a recorded call between them, where she appeared resistant to whatever he was proposing.

“Mi just nuh waan do dem deh something deh, God know, mi just no like it,” she said.

Spice added that it was Smith who “force mi fi believe in a bath,” highlighting his claim that he flew to Maryland to perform the ritual for her ahead of her Love and Hip Hop Atlanta interview. She continued by saying he is desperate and envious of her success and shared her receipts of helping him with his music career.

“Use me as reference, Watch your friends and Listen to them keenly, be wise, when they say ‘People say’ or ‘people thinking’ they are really talking about themselves. DO NOT MENTION his name below, I refuse to answer because he’s hungry for attention and fame but I refuse to give him what he wants. My voice notes with him are being edited to suit his desire but I have one question ‘IF YOU DID SO MUCH FOR ME WHY YOU CAN’T DO IT FOR YOURSELF’? They will come one by one and I will still be right here standing. I WILL NOT ANSWER THIS DEMON,” she said in an Instagram post.

Smith subsequently went live on Instagram to confirm that it was his voice in the recordings played, but that he was only advising her. He also reminded viewers that he had already admitted that she wrote his 2019 song Dalla.

Smith continued his rant by showing conversations where she asked for his thoughts on her current boyfriend, which he approved. He also made claims about Spice’s relationship with her dancers, her sexuality and the paternity of her son.