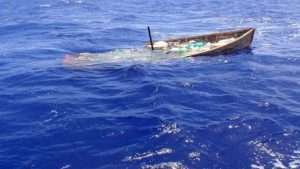 (TRINIDAD EXPRESS) – Venezuelan authorities have arrested the owner of the boat that was transporting Venezuelans to Trinidad which sank and resulted in multiple deaths, including children.

Reuters reported yesterday that as many as 20 people may have died.

According to the Reuters report, Venezuela’s Chief Prosecutor Tarek Saab wrote on Twitter that 56-year-old Luis Martinez had been arrested and the case assigned to prosecutors specialising in human trafficking.

“The prosecutor’s office reiterates its commitment to sanction (the people) responsible for these crimes, who have organised mafias that operate between Sucre and the island of Trinidad to promote…human trafficking,” Saab wrote.

Reuters stated the government of President Nicolas Maduro initially said it had found 14 bodies floating off shore from Guiria in the state of Sucre, a frequent departure point for migrants fleeing Venezuela’s economic crisis to Trinidad and Tobago.

It stated at least 40,000 Venezuelans live in Trinidad and Tobago, many of whom arrived in small rickety boats overloaded beyond capacity, with limited supplies of fuel and food.

It noted that last year at least two ships that set off from Venezuela en route to Trinidad disappeared at sea.

The images of the drowned victims have been circulating on social media for the past two days.

The Trinidad and Tobago Coast Guard stated on Sunday that it received information from Venezuelan authorities indicating 11 bodies had been recovered on Saturday from the waters close to the Venezuelan coastal town of Guiria.

This number subsequently increased to 19 and Reuters reported 20 yesterday.

The Coast Guard stated preliminary information suggests a vessel had departed Guiria on December 6, 2020 with more than 20 persons on board. These persons have not been seen or heard from since that day.

Some Venezuelans who claim to be relatives of the drowned persons claimed the vessel had reached Trinidad and the Coast Guard escorted it back out and did not allow entry.

The Coast Guard however stated on Sunday it did nor intercept any vessels coming from Guiria on December 6 or any time thereafter.