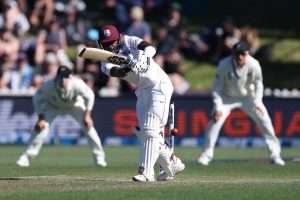 (AFP) – New Zealand won the second Test against the West Indies by an innings and 12 runs in Wellington to sweep the two-Test series.

The Test ended in the first session on day four after the West Indies, out for 131 in their first innings, folded for 317 in their second in reply to New Zealand’s first innings 460.

After the West Indies resumed the day at 244 for six, Tim Southee and Neil Wagner took two wickets apiece to complete the match.

The win extended New Zealand’s unbeaten home run to 15 Tests and lifted them to equal with Australia on points at the top of the world rankings.

New Zealand’s next home series, against Pakistan, starts on December 26