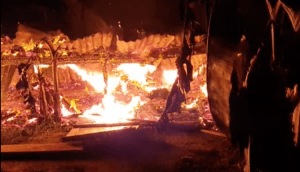 Dead are Caroline Kennedy and her two daughters, 5-year-old Mariana Downer and 3-year-old Gabriella Kennedy. The community remains in shock over the tragedy; the incident occurred at around 23:00h.

The News Room understands that the man and his wife had an argument earlier in the night; it is suspected that he lit the small wooden house on fire while the woman and the children were sleeping.

“It is cruel and heartless to kill your spouse, but a father who kills his daughters, is not human. Our prayers are with the relatives, friends and the entire four miles community,” the mayor said.