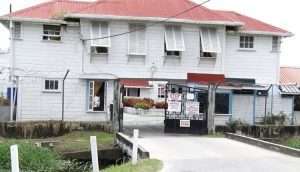 (GUYANA NEWS ROOM) – The parents of a six-day-old baby who died at the West Demerara Regional Hospital (WDRH) 17 days ago and who was diagnosed with COVID-19, are accusing health professionals of neglect and foul play.

“Is some foul play because baby born healthy…when I find out from the doctor, he had said the baby heartbeat and everything ok,” the father of the child told the News Room.

The family was first told the baby died from COVID-19, but according to the parents who spoke with the News Room at the hospital on Wednesday, they were subsequently told by the hospital officials that the test was a false positive.

As a result, the father requested a post mortem to determine the real cause of death of his baby boy.

“They told us [Tuesday] that the baby will get cut [Wednesday] because initially he was supposed to be cut [Tuesday] but they tell we they weren’t doing any post mortem. Then we go back there this morning [Wednesday], they say no file ain’t there for the baby, so [I don’t] know what really going on,” the father told the News Room.

He believes, “they kill the baby and they try to cover up what it is…I want to know how baby died.”

Meanwhile, the frustrated mother of two said she just wants to give her baby a proper burial.

The 6-day old baby was born via caesarian section on November 17 and died on November 23 while in the Neonatal Intensive Care Unit (NICU).

During the six days in the hospital, the mother explained that she had little to no physical contact with her baby and nurses have been giving conflicting responses about his diagnosis.

She said the baby was born healthy, but she was later told he had “swallowed bad water,” then that he had jaundice and so he was placed in the NICU; the mother was discharged from the hospital and was recalled on November 22 where she was asked to place the baby on her chest and according to her, the baby was healthy. The following day –November 23 –she was called to the hospital and presented with a dead baby.

“He was healthy…when I come to the hospital, there was a dead baby in front of me.”

The Ministry of Health on November 30 said the baby died from COVID-19 but after both parents tested negative for the disease, the parents were told by officials at the West Demerara hospital that the test was a false positive for the baby.

But Chief Medical Officer Dr. Narine Singh on Tuesday told the News Room that as a precaution, about 12 employees who came into contact with the baby have been identified but only some were swapped for COVID-19 and their results came back negative.

The Chief Medical Officer also debunked the claims of a false COVID-19 positive and verified that the baby tested positive twice for the virus after he died.

As a matter of fact, the Chief Medical Officer also noted that the baby may have contracted the dreaded virus at the West Demerara Regional Hospital. As it relates to reports which indicate that the baby was born with a heart defect, the parents claim they were never informed of such and was only made aware of this via the media.

The News Room understands that the post mortem examination will be done on Friday morning after which a cause of death will be determined.

The frustrated parents are calling for a full investigation into their son’s death.