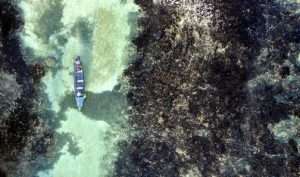 (CMC) — The United States National Oceanic and Atmospheric Administration (NOAA) has announced plans to protect thousands of miles of coral reefs in the Caribbean and Pacific Ocean.

NOAA said that increasing population growth rates, along with economic and industrial development, has resulted in “unprecedented pressure to coral reefs” and these pressures include impacts from climate change, unsustainable fishing and land-based pollution.

It said its Coral Reef Conservation Programme (CRCP) funds and equips reef conservation activities in the seven US states and jurisdictions containing coral reefs, and it is conducting the study “to provide a quantitative measure of how important the reefs are to the United States Virgin Islands (USVI) in monetary terms and also to generate a reference point with which to compare possible alternative development/conservation plans.

“The assumption being that information on the Total Economic Value (TEV) of reefs should provide a basis for advocating the preservation of the coral reefs in USVI, establishing damage compensation, setting fees for permit applications or determining potential user fees for residents and tourists,” NOAA said.

It said the approach for the study is to focus on valuing the six main uses of coral reefs and adjacent habitats in selected sites on the USVI: fishery value; tourism value; recreational and cultural value; real estate value; shoreline protection; and education/research values.

Based on the overall approach, NOAA said the study involves a wide range of research activities.

These include an elaborate local resident survey aimed at estimating the local cultural and recreation attachment to the marine environment; an extensive tourist survey with the objective to get a comprehensive insight into the importance of the marine environment for visitors to the USVI; and a thorough analysis of the coastal protection function of reefs, thereby revealing the role of coral reefs in avoiding storm damage to properties and infrastructure.

NOAA said Caribbean protections would cover 5,900 square miles of “critical habitat for five threatened corals” off the coast of Florida, Puerto Rico and the USVI.

NOAA said some of the new Caribbean protections overlap with those already done for the imminent elkhorn and staghorn corals that have been ravaged by white band disease.