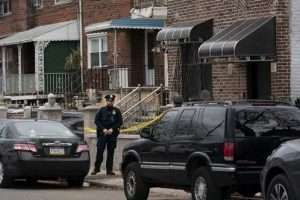 (AP) — A fugitive who shot a Massachusetts state trooper in the hand during a traffic stop two weeks ago was killed early Friday during a gunfight with US marshals in New York City that left two of the officers wounded.

The two deputy marshals injured in the 5:30 am confrontation at a Bronx apartment were treated at a hospital and were expected to recover. One was hit in the leg and another was struck in his arm and leg, according to federal officials.

Thirty-five-year-old Jamaican native, Andre Sterling, was killed in the shootout and his gun was recovered at the scene. A second man in the apartment was arrested.

Sterling was wanted for the November 20 shooting of a trooper during a late-night traffic stop in Hyannis, on Cape Cod. Trooper John Lennon, 28, was hospitalised for several days after a round went through his right hand and appeared to have struck his ballistic vest.

Massachusetts US Attorney Andrew Lelling said the deputies were executing a fugitive warrant his office issued for Sterling when they were confronted with gunfire.

There was a national alert sent out advising law enforcement agencies to be on the lookout for Sterling and that he was “armed and dangerous.”

“At a time of constant, opportunistic, and absurd anti-police rhetoric, this is today’s reminder of the sacrifices law enforcement officers make every day to keep us safe,” Lelling said in a statement.

City police blocked off a four-block area of the Bronx’s Wakefield neighbourhood, where trees, brick row houses and single-family homes line the streets.

Three marshals with the New York/New Jersey Regional Fugitive Task Force took fire as soon as they entered the Bronx home where they believed Sterling was located, according to a law enforcement official who was not authorised to discuss the incident publicly and spoke to The Associated Press on the condition of anonymity.

Four Massachusetts state troopers were at the scene to maintain a perimeter.

Sterling had two more warrants in Massachusetts on charges including identity fraud and assault and battery on a police officer, and he was wanted on narcotics charges in Wyoming, according to police in Massachusetts.