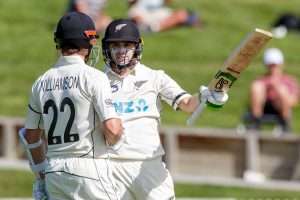 (AFP) — The West Indies delight at winning the toss on a lush green wicket turned to frustration as New Zealand were rarely troubled in posting 243 for two on day one of the first Test in Hamilton on Thursday.

Kane Williamson, despite being troubled with cramp late in the day, produced a masterful innings to be unbeaten on 97 at stumps with Ross Taylor on 31.

Williamson featured in a 154-run stand with Tom Latham for the second wicket before Latham was bowled for 86.

After the start of play was delayed two hours by rain, the West Indies were delighted to win the toss with an emerald wicket that potentially offered untold demons for their pace attack.

But after Shannon Gabriel bowled Will Young early for five, the tourists found they did not getting the assistance they expected from the wicket.

“We thought the pitch would have done a bit more seeing as it was such a green pitch, but probably two or three balls took off from a length other than that I thought it played really true,” West Indies vice-captain Roston Chase said.

Chase also saw flaws in the visitors’ attack which they failed to rectify.

“Obviously we didn’t have the best day in the field, we only got two wickets,” he said.

“I thought they left the ball well and in certain areas I thought we could have made them play a bit more.”

It appeared to be a case of not doing thorough homework as Latham said the pitch was not unusual for New Zealand.

“Even though the wickets are traditionally very green on day one in New Zealand they don’t tend to do as much as you would think,” the Black Caps opener said.

“They probably bowled a fraction short which allowed us to get ourselves in a little bit earlier than they would have liked.”

A year ago, Seddon Park offered a similarly green wicket when New Zealand played England in what became a high-scoring draw with England skipper Joe Root making 226 while England opener Rory Burns posted a century as did Latham, Williamson and Taylor for New Zealand.

Williamson, who will resume on Friday requiring just three runs to register his 22nd Test century, worked patiently with Latham for more than 50 overs, waiting for bad balls to hit as the pair were rarely tempted to play shots at anything else.

Gabriel, Kemar Roach and Holder could not keep a consistent line and saw rare chances spoiled by fielding errors.

The 2.01 metre (6ft 7in) Holder used his height to extract some bounce but the no-risk approach of Latham and Williamson served only to tire the big Barbadian.

Wicketkeeper Shane Dowrich had an uncomfortable day by failing to get a glove to a chance from Young, although the New Zealand opener went leg before with the next delivery.

Then Dowrich did not appeal when it appeared he had caught Latham on 43 off Holder, who also kept quiet. But replays indicated there had been contact as the ball passed the toe-end of the bat.

On 80, Latham was well out of his crease when he aborted an attempted cheeky single, but Shamarh Brooks’ shy at the stumps went well wide.

Roach, wearing a black armband in memory of his father who died recently, eventually bowled the left-hand opener off an inside edge from a full-length delivery.

The composed Williamson underscored his self-restraint on 49 when he faced 24 balls before reaching his 33rd half-century with a single off Chase when the West Indies called on the spin of the all-rounder.

The day was further worsened for the tourists just before stumps when form batsman Darren Bravo was stretchered from the field after injuring an ankle.