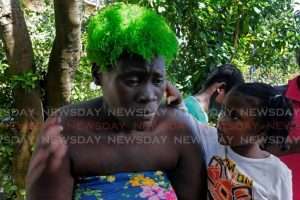 (TRINIDAD NEWSDAY) – Mother of five Neisha Wattley, known for her infamous comment, “That making any sense?” – which is still a meme on social media – is now pleading for the Housing Development Corporation (HDC) to give her another chance at becoming a homeowner.

“Everyone deserves a second chance. I was given an opportunity to become a homeowner and because of (a relative’s) engagement in illegal activities at the house, I lost my home. I did not a chance to tell my side of the story. I was not involved in any illegal activities. But no one would hear me.” said Wattley, 29.

Wattley said for the past five years she has been ridiculed and laughed at on social media and in person for making the comment “That making any sense?”

“Up to this day, I can’t even walk the road in peace. People laugh at me and make fun of me. I made that comment years ago when I explained a situation that getting from the house and to take my children to school was difficult.

“But it was taken out of context. Every time I go on social media my face is there and I am a joke. The shame has also passed on to my children, as their classmates also laugh at them.”

After Wattley’s plea for housing the first time, she was assigned a home in Central Trinidad, but she complained that it was too far for her childen to travel to school and asked increduously “That making sense?”

In December 2016, Randall Mitchell, who was then Minister of Housing Development, presented Wattley and her family with the keys to a new home in Eden Gardens, Chaguanas.

But in 2019, Wattley and her husband at the time,Chris Rambhal, were evicted after neihghbours complained about illegal activities taking place at the house. Wattley said they were evicted as a result of Rambhal’s behaviour, but said she was not given a hearing and was made to pay the price for his actions.

Watley said before being evicted she had to leave the HDC house to take care of her mother, who had cancer.

“I had to spend months with my mother. She was ailing of cancer and I did not know that during these months Chris was involved in illegal activities.”

She said by the time she found out about the eviction, it was too late.

“We lost our home. My children lost a comfortable home.”

Wattley is now staying at the home of a relative with her common-law husband Prince Sylvester, their two-month-old baby, and her four children. She said the accommodation is temporary.

“My husband has been trying to make ends meet, but things have really been hard for us. Work has slowed down for my husband and me tremendously because of the covid19.

“I could not even afford to buy any tablets or laptops for my children so they had to do (school)work at home. They never got a chance to start online classes. It is hard to get anything from their father. If I did not need the help I would not have asked, but God knows we need the help, please. I am just begging for a chance. I am not a joke.”

Wattley said people have labelled her ungrateful because she made the comment, which was never the case.

“HDC, please hear my cry. And if there is anyone who has even used tablets or laptops that is working and they want to donate them to my children,” she added, “I will be entirely grateful.”