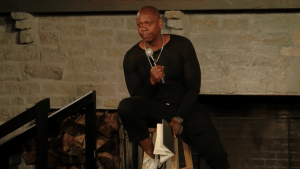 (VULTURE) – Instead of its annual Rewind, YouTube has just dropped a list of this year’s top-ten trending videos, and now we get it: Like 2020 itself, the roster of this year’s highest-ranking videos in the United States is a mess.

The chaos includes Ricky Gervais’s pre-quar Golden Globes monologue at No. 8, Jeffree Star’s breakup video at No. 4 (Karmageddon unmentioned), Saturday Night Live’s presidential-debate cold open starring Jim Carrey as Joe Biden at No. 3, and, topping it all off, Dave Chappelle’s “impromptu purging of feelings and thoughts,” 8:46, which grapples with racial injustice. The list does have its upsides. No. 6 is NikkieTutorials’ coming-out video, in which she bravely told the world that she’s transgender, and No. 10 is the premiere of John Krasinski’s quarantine talk show Some Good News.

The rest of the list is pure YouTube. No. 2 is “Building the Perfect Squirrel Proof Bird Feeder,” No. 5 is Mr. Beast’s “I Bought the World’s Largest Firework,” No. 7 is gamer Dream’s “Minecraft Speedrunner VS 3 Hunters GRAND FINALE,” and No. 9 is a spin on a classic trend, “Quarantine Stereotypes,” by Dude Perfect. Tackling everything from politics to the pandemic, the list boils down to a “Yeah, that happened.” As for music videos, Drake and Future dominate with “Life Is Good,” followed in the top five by 6ix9ine’s comeback track, “Gooba”; “We Paid,” by Lil Baby and 42 Dugg; “Walk Em Down,” by NLE Choppa, featuring Roddy Ricch; and “WAP,” by Cardi B featuring Megan Thee Stallion. Congratulations for now! The year 2020 still has 30 days left to wreak havoc all over these lists.