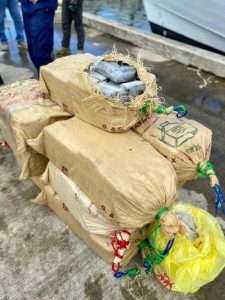 A release on the CBP website reported on the night of November 23, AMO and the US Coast Guard interdicted a “yola” type wooden vessel transporting 816 pounds (370 kilos) of cocaine and arrested three men from the Dominican Republic attempting to enter near Arecibo, Puerto Rico. The estimated value of the seized narcotics is $10 million.

“Transnational criminal organisations attempt to smuggle narcotics in different locations throughout our island testing our resolve,” said Air and Marine Operations for the Caribbean Air and Marine Branch Director Johnny Morales. “Our agents continue to use advanced aeronautical and maritime capabilities to detect and interdict them throughout our coastal borders.”

The CBP reported on the evening of November 23, AMO launched from the Caribbean Air and Marine Branch to conduct a border security patrol. The Marine Patrol Aircraft (MPA) crew detected the “yola”-type vessel heading south eastbound at approximately 13 knots without navigational lights.

“This successful interdiction is the result of the hard work and dedication of the all the federal and state partners committed to eliminating illicit trafficking from the waters of Puerto Rico and the US Virgin Islands,” stated Deputy Commander Captain Jose E. Diaz. “Keeping dangerous drugs off the streets save lives; today, Coast Guard, Customs and Border Protection, and FURA (Puerto Rico’s Joint Forces of Rapid Action) crews saved lives.”

Coast Guard transported the contraband and the arrested individuals to Arecibo, Puerto Rico, where Caribbean Corridor Strike Force (CCSF) agents took custody for prosecution and investigation. The CCSF is a multi-agency organised crime drug enforcement task force group operating in the District of Puerto Rico focusing on Caribbean and South American-based transnational criminal organisations involved in the maritime and air smuggling of shipments of narcotics to and from Puerto Rico and to the Continental US, and in the laundering of drug proceeds using bulk cash smuggling and sophisticated laundering activities.