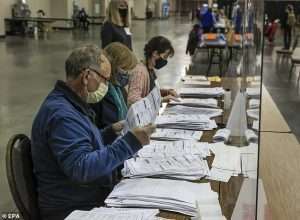 The recounts demanded by Trump’s reelection campaign in two of Wisconsin’s most populous and Democratic-leaning counties, Milwaukee and Dane County, concluded Friday and Sunday respectively.

Wisconsin law requires the campaign requesting the recount to foot the bill, meaning the it cost Trump’s campaign $3 million and only advanced Biden’s victory over the president.

Overall, the recounts gave Biden 257 more votes to Trump’s 125, giving the former vice president a net 87 more votes than he originally held over the president in Wisconsin.

This revelation undermines Trump’s bid to overturn the election results as he claims widespread voter fraud and ballot irregularities, which he insists hurt him in his reelection race.

The president’s campaign maintains that this outcome proves there are further issues regarding the integrity of the election in Wisconsin, where Biden won by just 0.7 per cent.

‘The recounts in Dane and Milwaukee Counties have revealed serious issues regarding the legality of ballots cast,’ the campaign’s lawyer Jenna Ellis said in a statement to DailyMail.com.

‘As we have said from the very beginning, we want every legal vote, and only legal votes to be counted, and we will continue to uphold our promise to the American people to fight for a free and fair election,’ she added.

The former vice president also leads by more than six million in the popular vote tally.

The Trump campaign is still expected to mount a legal challenge to the overall result in Wisconsin, but time for that is running out as the state is due to certify its presidential result on Tuesday.

The Wisconsin Election Commission will meet Tuesday to vote on certifying the election results. The chairwoman of the six-member panel, who is a Democrat, said the state will move to certify the state’s popular vote win for Biden.

The president still plans to launch legal battles in an attempt to prevent Wisconsin from moving forward.

The three Republicans on the state’s six-member election commission could seek to delay certification with a deadlock while the process unfolds.

‘The Wisconsin recount is not about finding mistakes in the count, it is about finding people who have voted illegally, and that case will be brought after the recount is over, on Monday or Tuesday,’ Trump wrote in a tweet Saturday.

He added without providing any evidence: ‘We have found many illegal votes. Stay tuned!’

The Wisconsin blow is just another in a series of losses for Trump’s battle to overturn his loss.

His efforts to stop Michigan officials from certifying the vote earlier this month failed.

A hand recount of ballots in Georgia confirmed Biden’s win there and two new court decisions in Pennsylvania late last week rejected the president’s campaign’s attempts to halt the vote count there.

Four of six states where Trump has tried to halt the certification process have already certified and on Monday, Arizona is set to finalize the results there, as well.