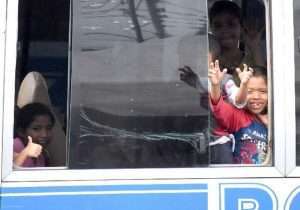 (TRINIDAD EXPRESS) – A CHILD-TRAFFICKING and illegal adoption ring involving Venezuelan children is active throughout the Caribbean, with Trinidad and Tobago being at the epicentre.

This is stated in a confidential e-mail sent on November 26 addressed to Sandra Flores, head of the United Nations High Commissioner for Refugees (UNHCR), Trinidad and Tobago, by Dr Cleophas Justine Pierre, partner in the Canadian firm Dunn, Pierre, Barnett and Company Canada Ltd,

In the e-mail, Pierre raised a series of questions relating to illegal Venezuelans crossing T&T borders with ease and knowing exactly where to go and whom to contact upon their arrival.

The e-mail, addressed to Flores, was subsequently shared within a private WhatsApp group belonging to members of the UNHCR (T&T), a copy of which was obtained by the Express.

Last week at a news conference, National Security Minister Stuart Young questioned how children end up in T&T without their parents, which he said was a typical “red flag” of human trafficking. He said local law enforcement officials are engaged in the illicit action and hopefully one day they would be brought before the court.

The news conference was called to deal with last week’s incident where 16 children and 11 adults came illegally to T&T, were “escorted” back to Venezuela, according to Young, but returned three days later.

Speaking with the Express on the condition of anonymity last week, a UNHCR official said the situation in Venezuela is a national security concern for the Caribbean, and mainly the Government of T&T, which “can destabilise the country if left unchecked”.

Checks by the Express revealed that Dunn, Pierre, Barnett and Company has been retained by Caricom to conduct a comprehensive study which will inform the methods to be used to design interventions that are evidence-based and consistent with best practices in anti-trafficking including, but not limited to prevention, protection, and prosecution.

During this period and up to the present, the firm interviewed several people, inclusive of illegal migrants, shelters for migrants and also collected evidence of trafficking based in the above-named countries.

The Canadian research team has already met with critical stakeholders and individuals from vulnerable communities, victims and proprietors from the named countries and Venezuela.

The Express has been told by an official who deals with refugee issues that children are either kidnapped from poor areas in Venezuela or sold willingly by their parents to human traffickers with promises that their children will be receiving a better life.

In several instances, these children are smuggled into Caribbean countries where an illegal adoption process takes place and monies are paid to secure the children.

Additionally, whilst some parents are in T&T legally, having undergone the registration process by the Ministry of National Security, their children remained in Venezuela with other relatives. This has now changed, however, and parents have been arranging with local fishermen to illegally bring more relatives into the country.

Contacted by the Express last Saturday evening and asked to comment on the contents of his pending report and the e-mail sent last week to Flores, Pierre said, “It will be highly unethical and unprofessional of me to discuss with the media the details of my client’s (Caricom) business. The interaction I have had with individuals/organisations involved in this study are for my clients. I do not know how you came into possession of the correspondence (e-mail) nor will I address the contents with the media. Enjoy your day.”

Under the subject headed “Disturbing trend in Venezuela with the human-trafficking trade route to Trinidad and Tobago”, the e-mail states:

It was a pleasure speaking with you and your team regarding Human Trafficking in Trinidad and Tobago and Venezuela. As you are aware by now that we have a Human Trafficking Team on the ground in Venezuela. On Tuesday, November 23, we interviewed some of the repatriated persons who were sent back from entering Trinidad and Tobago. During the interviews, we found out that some of the deported migrants had advanced knowledge of where they would be staying upon their arrival in Trinidad (we wanted to know why?). It was also disclosed that there is an alleged illegal adoption ring operating from Venezuela to Trinidad and Tobago, Chile, Argentina, Aruba, and Spain where young children are either trafficked/smuggled into adoption, or even kidnapped or sold into adoption. Most disturbing is that this operation is highly organised, with contacts at high levels in Trinidad and Tobago, Chile, Mexico, and Europe….”.

The e-mail added: “Furthermore, we also found that many of the economic migrants who are smuggled into Trinidad are misinformed into thinking that your organisation (UNHCR) and the Living Water Ministry are sanctuaries for refugees or anyone entering Trinidad and Tobago from Venezuela. We found people in the villages having detailed information about your organisation and the Living Water Ministry, which we found very strange and unusual. We also found that information about these organisations translated into Spanish. We will be writing a report on this new development over the next few weeks.”