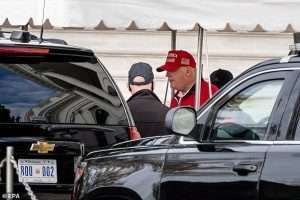 (dailymail.co.uk) – President Donald Trump said on Friday that Joe Biden can only enter the White House if he can prove his votes are not ‘fraudulent’ – a step back from Thursday’s admission he would cede the residence for his Democratic rival in a peaceful transfer of power.

‘Biden can only enter the White House as President if he can prove that his ridiculous “80,000,000 votes” were not fraudulently or illegally obtained. When you see what happened in Detroit, Atlanta, Philadelphia & Milwaukee, massive voter fraud, he’s got a big unsolvable problem!,’ Trump tweeted.

Trump has refused to concede the election despite Biden’s massive lead in the popular vote and the electoral college. Several foreign leaders have recognized Biden as the president-elect, calling to congratulate him, and so have several top business leaders, including some who are close to Trump.

Additionally, the president’s campaign has shown no evidence of massive voter fraud. State officials have also said the election was smoothly run. Trump’s legal cases have gone no where. A hand recount of ballots in Georgia confirmed Biden’s win there.

Trump’s legal team, led by Rudy Giuliani, has tried to move the ball forward. But Giuliani’s bizarre press conference at the Republican National Committee headquarters on Monday raised more questions than answers and a hearing-style event in Gettysburg, Pennsylvania, on Wednesday, which Trump called into, revealed no evidence of voter fraud in that state.

Despite it all, Trump continues to proclaim he’s the victor.

But the president – just one day before on Thanksgiving – said he would leave the White House if the electoral college certifies Biden’s victory when it meets on December 14.

He also admitted that it’s a ‘very hard thing to concede’ the election.

He stopped short of admitting that meant he had lost – despite Biden’s huge lead in Electoral College votes – and refused to say if he would attend the inauguration.

When asked whether he would vacate the building, allowing a peaceful transition of power in January, the president said: ‘Certainly I will. But you know that.’

But, on Friday, Trump spent his morning in a slew of angry Twitter rants, complaining about the social media company, alleging the 2020 election was a ‘scam,’ and retweeting campaign style videos with a fight theme.

‘This is what Communist countries do!,’ Trump tweeted about Twitter after it suspended the account of one of his Republican allies trying to help him over turn the election results.

‘Big Tech and the Fake News Media have partnered to Suppress. Freedom of the Press is gone, a thing of the past. That’s why they refuse to report the real facts and figures of the 2020 Election,’ he complained.

He shot off more than two dozen tweets and retweets before arrived at his Trump National Golf Course in Sterling, Va., for a game. He also played a round of golf on Thursday morning. Twitter has put labels on many of his tweets for containing disputed information.

He will travel to Camp David on Friday afternoon to meet with his family after his golf game.

Trump longtime aide Dan Scavino, who is close to the president and his family, posted a photo on Twitter of all the adult Trump children together outside sitting around a fire pit. Their significant others are with them.

The location on the tweet says ‘Camp David’ – the secluded presidential retreat in Maryland – and it was posted Thursday night.

Trump took his first questions from reporters since the election on Thursday, after he spoke to U.S. troops for the Thanksgiving holiday.

But he got into a heated, angry exchange with one reporter who pressed him on when he would concede to Biden.

‘I’m the President of the United States. Don’t ever talk to the president that way,’ Trump told Reuters correspondent Jeff Mason on Thursday.

In his 25 minute back-and-forth with the media, Trump didn’t concede his loss and insisted his legal arguments would go ahead. He argued he has time until the inauguration – which is 54 days away – but admitted it’s ticking fast.

He reiterated unproven conspiracy theories about voting machines changing votes for him to Biden, complained the election was ‘rigged’ and alleged Biden only got his record 80 million votes through ‘massive fraud.’

Trump is trying to over throw the election results by going to court in battleground states but his legal cases have been going nowhere. States are in the process of certifying their results.

‘Time isn’t on our side,’ the president conceded.

Mason asked the president if he would consider offering a proper concession after the Electoral College meets on December 14. That is when Biden’s victory will be made official.

Trump, however, said that the Electoral College should not confirm Biden’s win.

‘Well if they do, they made a mistake, because this election was a fraud,’ the president said in response to Mason’s question.

‘Just so you understand, this election was a fraud,’ he continued.

Trump said it was inconceivable that Biden won, since the former vice president captured more votes in key swing states than Barack Obama did in his election victories.

The United States has grown in population size by 27 million people since Obama first ran in 2008 and this year’s contest.

‘[Biden] is beating Obama in swing states, which are the states that mattered for purposes of the election,’ the president said.

‘So no, I can’t say that [I will concede] at all. I think it’s a possibility… they’re trying to, look, between you people…’

At this point, Mason interrupts the president and begins to ask his next question before Trump finished giving his response.

‘You have to really take a look at what’s going on. They’re finding tremendous discrepancies in the votes, and nobody believes those numbers those numbers are incorrect numbers,’ Trump said of the vote tallies.

Asked whether he would attend Biden’s inauguration on January 20th, Trump said he knew the answer but didn’t want to share it yet.

As for whether or not he plans to formally declare his candidacy to run again in 2024 – as he has discussed with aides – Trump he didn’t ‘want to talk about 2024 yet.’

All states must certify their results before the Electoral College meets on December 14, and any challenge to the results must be resolved by December 8.

Trump’s last hope could be January 6, 2020, which is when Congress meets to formally certify the results of the electoral college.

But the transition process has already begun.

The General Services Administration, led by a Trump appointee, announced this week that federal agencies and the Biden Transition Team could start communicating.

The president elect is starting to name his cabinet.

Trump still refuses to give up.

Specifically on Thursday the president complained about results in states he won in 2016 but lost to Biden in November, specifically calling out Michigan, Wisconsin, Pennsylvania and Georgia.

‘You will find tens of thousands of false ballots,’ he promised.

He alleged voters in Pennsylvania who tried to vote were told they already had, said he was winning in Wayne County in Michigan but then said canvassers wouldn’t certify for him, claimed there were ‘tremendous discrepancies’ in Wisconsin, and faulted Democrat Stacey Abrams for his loss in Georgia.

Trump accused Abrams, who worked on voter registration in Georgia, with harvesting votes.

‘Ballot harvesting’, as it’s called, is when a third party collects an individual’s legal vote and turns it into state officials. The practice is legal

He also railed against Georgia Secretary of State Brad Raffensperger, a Republican who led a hand recount of the state that certified Biden’s win, an ‘enemy of the people.’

Georgia officials are doing another recount at Trump’s request.

Biden became the first Democrat to carry the state of Georgia since 1992 and many Democrats credited Abrams’ get-out-the-vote operation in the state for his victory there.

Trump is going to Georgia on Saturday, December 5, to campaign for Republican Senators Kelly Loeffler and David Perdue. The two candidates are in a January 5th runoff election. Republicans need to win both seats in order to maintain their control of the Senate.

The president said he spoke to them about his concerns about Georgia’s voting.

‘I told them today I said listen you have a fraudulent system, you have a system with the flick of a switch or the putting in a new chip can change the course of history,’ he said.

In Pennsylvania Trump’s legal team is trying to stop certification of the state’s 20 electoral votes for Biden.

Rudy Giuliani, Trump’s personal attorney who is leading the charge in trying to overturn the election, testified at a Republican-led hearing of sorts on Wednesday, which Trump called into to implore GOP officials in the state to find he won Pennsylvania.

‘This election has to be turned around. We won Pennsylvania by a lot and we won all of these swing states by a lot,’ Trump said via a cellphone his attorney Jenna Ellis held up to a microphone.

Trump also tried to subvert results in Michigan. He met with two state lawmakers at the White House to discuss the election.

But, despite his efforts, the two men said they haven’t seen any evidence that would change the fact that Biden won their state.

‘We have not yet been made aware of any information that would change the outcome of the election in Michigan and as legislative leaders, we will follow the law and follow the normal process regarding Michigan’s electors, just as we have said throughout this election,’ Senate Majority Leader Mike Shirkey and Michigan House Speaker Lee Chatfield said in a joint statement after their meeting with President Trump last week.

In Wisconsin, Republicans filed a lawsuit Tuesday asking the state Supreme Court to block certification of the presidential election results as a recount is ongoing. The state is supposed to certify its results on Tuesday, December 1.