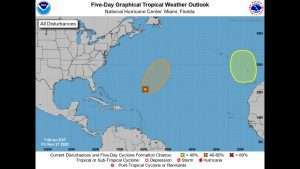 But the US National Hurricane Centre said its associated showers and thunderstorms have decreased in coverage since yesterday and development is unlikely during the next day or so due to unfavourable upper-level winds.

“By Sunday, environmental conditions are expected to become a little more conducive for the low to briefly acquire subtropical characteristics as it moves north-eastward ahead of a frontal system,” NHC said.

“By early next week, conditions are expected to become unfavourable for further development as the system interacts with or becomes absorbed by a frontal system. It has a medium (40 percent) chance of formation during the next 48 hours and five days.”

Another non-tropical area of low pressure is expected to form over the far eastern Atlantic during the weekend.

NHC forecast this system could gradually gain subtropical characteristics early next week while it moves slowly southward to the west and southwest of Portugal.