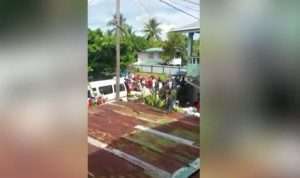 (GUYANA NEWS ROOM) – Police are on the hunt for 38-year-old Devon Anderson, of Goed Intent, West Bank Demerara, who allegedly beat his 62-year-old mother to death and stuffed her body inside a wardrobe on Thursday.

The man, who is said to be a drug addict, also allegedly brutally beat and injured his four-year-old niece.

The dead woman has been identified as Jennifer ‘Judith’ Anderson; her body was found inside the wardrobe at around midday by a relative, who observed numerous marks of violence.

The News Room understands that the child is hospitalised at the West Demerara Regional Hospital with injuries to her abdomen.

The News Room understands that Anderson was home alone with the four-year-old when Devon arrived home reportedly “high” on drugs and it is believed that he committed the act and escaped.

The four-year-old managed to leave the house and went to a neighbour, who then took her to the relative’s house nearby.

The relative then went back to the house with the child and found Anderson’s body. Neighbours claimed that they did not hear any noise emanating from the house.