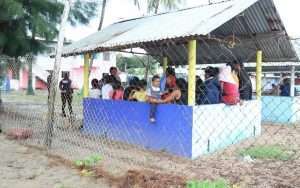 (TRINIDAD EXPRESS) – Prime Minister Dr Keith Rowley has issued a statement on the issue of migrants from Venezuela who are continuing to flee their country and travel by boat to Trinidad.

“Why should we be surprised? “ he asked in a statement from the Office of the Prime Minister on Wednesday.

“The OAS under its misguided President Almagro has been almost singlehandedly responsible for triggering and fueling the current Venezuelan situation and these public officials have virtually declared war on Trinidad and Tobago for having the temerity to have not joined Elliot Abrams and President Trump in forcing violent regime change in Venezuela” said Rowley.

He said that “Trinidad and Tobago is currently under the latest assault, using nameless, faceless people armed with innocent children, to try and force us to accept their understanding of “refugee status and international treaty” where a little island nation of 1.3 million people must be expected to maintain open borders to a next door neighbor of 34 million people even during a pandemic.

He said that it is a matter, not for the OAS, but for the people of Trinidad and Tobago.

“Currently we have closed our borders even to our own citizens in this pandemic and would resist all efforts by others who are hell bent on forcing open our borders through illegal immigration.

Under the rubric of “humanitarian” this interpretation, if accepted, will effectively prise open our borders to every economic migrant, gun runner, drug dealer, human trafficker and South American gang leader/members. All they will be required to do is make the 7 mile boat trip and claim to be “refugees”. “

He said that government staunchly support the work of the United Nations “but this threat and the persistent disregard for the outstanding humanitarian efforts extended by the people of Trinidad and Tobago, do not conform with the spirit and purpose of the UNHCR.

It is our little island nation which facilitated the registration of 16,000 Venezuelan migrants and even as we ourselves are struggling to cope with our own difficulties we have afforded them comfort, aid and opportunity.

He said: “If after all that, our nation’s image is to be tarnished through the facilitation of illegal penetration of our borders then certainly, that will be the unkindest cut of all. I call on all the people of Trinidad and Tobago to continue to be the humane and caring people that we have demonstrated that we are, as we do not demonize our migrant neighbors but we all continue to be protected by the laws of Trinidad and Tobago.”