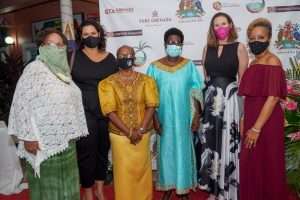 The premiere in Grenada began with a recorded panel discussion in which Jennifer Hosten spoke of her involvement in the making of the film about her extraordinary story followed by a personal welcome for the audience.

The movie which first premiered in the UK is praised for its portrayal of a defining moment in history: the crowning of Jennifer Hosten, the first woman of colour as Miss World. Directed by BAFTA winner Philippa Lowthorpe, ‘Misbehaviour’ stars Gugu Mbatha-Raw as Jennifer Hosten and Keira Knightley as a member of the newly formed Women’s Liberation Movement along with a star studded cast

Hosten, born in Grenada in 1947, was a flight attendant for BWIA (now Caribbean Airlines) when she took a leave of absence to compete in Miss World. The beauty competition was the most-watched TV show on the planet and in 1970 was hosted by US comedy legend, Bob Hope. When the live broadcast was interrupted by a Women’s Liberation Movement stage invasion, the global audience was captivated. Then, as Miss Grenada – the self-styled Nutmeg Princess – was crowned the first woman of colour Miss World, the moment was indelibly etched in history.

Following the premiere, Chairman of the Organizing Committee Alexandra Otway said, “We in Grenada are so proud because not only does our Jennifer shine, it’s a story that needed to be told. She broke glass ceilings long before it was fashionable.”

Visibly moved by the film, Tourism Minister Modeste-Curwen said, “It’s a signal to women and young girls, especially women of colour, that they too can achieve extraordinary things. I hope that this film can be shown to a wider Grenadian audience, especially children.”

‘Misbehaviour’ will be shown at Movie Palace for a limited period.