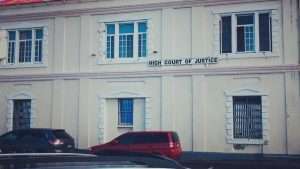 (LOOP NEWS CARIBBEAN) – The life of one man in the Caribbean island of Dominica is hanging in the balance as he just may face the death penalty for the murder of his partner in 2015.

The last execution in Dominica was in 1986 and now 34 years later the state is seeking the death penalty for Rodman Moses Lewis who was found guilty of murdering his girlfriend Triscia Riviere.

Just before 5pm on November 3, 2015, 4:50pm members of the Dominica police force responded to reports of a domestic dispute in

Stockfarm, a community just about 5 minutes away from the capital city Roseau.

The police found Tricia Riviere, the girlfriend of Lewis and mother of their young child bleeding with serious injuries.

She was unresponsive when officers arrived on the scene and was later pronounced dead.

The lead attorney for the State, Sherma Dalrymple believes that the heinous nature of the crime warrants an execution. She called it the “worst of the worst” noting also, that the death penalty is still on the law books of Dominica.

Lewis was convicted on November 19.

It only took one hour and fifteen minutes of deliberation for the jury to hand down the guilty verdict.

Up until his final hearing, Lewis, a former prison officer, maintained his innocence.

The trial took six and half weeks during which time more than a score of witnesses supported the prosecution’s case that Lewis had murdered Riviere.

The key witness for the state, Arlana Jno Baptiste Mitchel says she saw Lewis stomping on the head of the deceased several times.

He would not cease even after she tried to stop him.

The defence attorney for the accused called this a major flaw in the prosecution’s case adding that there was no proof that his client had caused the death of Riviere. He says none of the witnesses called for help for her even while Riviere was still clinging to life.

But with a guilty verdict handed down, sentencing is expected on February 1, 2021.

A life for a life? Dominicans weigh in on the death sentence

Crimes of this nature aren’t particularly common in Dominica and with the possibility of the perpetrator being handed a death sentence, citizens have joined the conversation.

Here’s some of what they had to say:

The crime was so gruesome! How could you love somebody that much and then do that to the person? That’s an extreme, 180 degrees and then what takes it for me is when he came and when he gave his testimony and said he didn’t kill her. Then who killed her? With a cylinder? You wanted her dead. If he had shot her maybe I would say no [to the death penalty]; or probably cut her, cause that is like the norm in crime but he intended to kill her…how do you think of a cylinder? I agree and I think they need to make an example of this guy.

It is a good thing. It’s a necessary thing especially for certain types of crimes.

In a case like that, of course, it’s necessary to show people that anyone that want to do these types of crimes then that’s what is waiting for you. This kind of crime deserves that type of punishment. A heinous crime deserves a heinous punishment, straight up.

According to the evidence, it seems that he is guilty of the crime but .…the death penalty, I’m not for it. That is my opinion.

We have to have compassion because sometimes we don’t know the state of mind of the person committing the crime. I don’t think it was a premeditated murder, I don’t think he went there to kill her. It happened that way that he ended up killing her. Everybody ends up in fights sometimes.

Yes, I do agree with the state trying to use this case to push for the death penalty to issue a stern warning for those who have intentions of committing such crimes or similar crimes. However, at the same time in the era that we live in currently, there should be some sort of heart or concern for the victim; that she did suffer before passing so maybe the perpetrator should suffer as well so a life sentence would be more fitting instead of the death penalty.

While I agree that Mr Lewis committed a very heinous act and that such a crime deserves a severe punishment, I do not think that Mr Lewis should receive the death penalty simply because everyone has a right to life, even those who commit murder. God is the giver of life and he instructs us in the ten commandments, “Thou shall not kill”. I, therefore, don’t think that the state has the authority to take the life of an individual no matter the situation. By killing Rodman we are going against the very act that he committed and two wrongs certainly cannot make the situation right. We should just let God be the ultimate judge of this situation and use the punishment that we have been using for several years whether its life imprisonment, whether it’s a very extended sentence but I do not support the use of the death penalty.

The death penalty to me, in some circumstances, can be very beneficial and very necessary and in some circumstances its not. In the case of Rodman Lewis, seeing that the death penalty has not been used since 1986 as I have researched upon, I would consider his mental state. As long as his mental health report can cover his actions, not cover because it would seem like as if we are giving him leeway for what he did but as long as his mental status does not cover the reason for his actions, then I don’t think he should be exempted from that list. I think the death penalty can be beneficial.

People may say that it is senseless because we have had other crimes that have been heinous and tragic, even far more tragic than Rodman and it did not resolve with the death penalty… If we were to use the death penalty under Rodman situation it would set an example to show criminals out there that we are indeed taking a next step forward in our judicial system because like many may agree I believe that the death penalty should have been revised through parliament many years ago. Because there are many instances where we should have considered such punishment.

In 1986, Frederick Newton was hanged in Roseau. Newton, a Commander of the Dominica Defense Force at the time was accused of organizing an attempted failed coup d’état in 1981 aimed at overthrowing Prime Minister Eugenia Charles. He and five of his soldiers were given death sentences by a Dominica court in January 1983. The sentences of the five soldiers were eventually commuted to life imprisonment, but in 1986, Newton became the only person to be executed by Dominica since its independence from the United Kingdom, when he was hanged in Roseau.