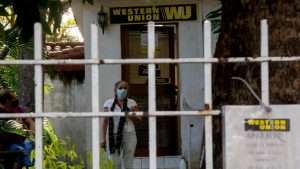 (AP) – Western Union closed its 407 locations across Cuba on Monday, a sanctions-driven move that will leave thousands bereft of remittances on an island that depends heavily on them — or force them to use less reliable ways to bring in money.

The closure of offices that have operated for more than 20 years in Cuba resulted from a barrage of sanctions that the administration of US President Donald Trump imposed while courting conservative Cuban-American voters in Florida ahead of the November 3 election.

“The problem is not the closure of Western Union, but that Western Union is practically the only US-to-Cuba provider of remittance payments,” said Manuel Orozco, director of the Center for Migration and Economic

Stabilization at Creative Associates International, a development-oriented advisory firm in Washington, DC “The impact will be felt.”

While Cuba doesn’t publish figures on remittances, economists estimate it receives billions of dollars a year and Orozco said that roughly half comes from the United States and 20 per cent of the overall total through Western Union.

Some Cubans said they were taken aback by the imminent closures despite the sanctions being announced in late October. Eighty-two-year-old retiree Luis Nuñes said he found out when his son called him on Sunday night and deposited $200 for him.

Many lamented the closures and the need to find less convenient or more costly alternatives.

“We have other ways because there are private services that take it to your home … but it’s not the same,” said Esperanza Piñeda, a 62-year-old retired teacher.

Family and friends abroad can still use other banks, agencies and small informal businesses to send money to people Cuba, or relay it through visitors travelling to the island through Havana’s airport, which reopened this month. They’ve even used cryptocurrency, noted Cuban economist Omar Everleny Pérez.

Granma, the Communist Party’s official newspaper, said Monday that the closures hit the safest way to send money to Cuba for those who cannot travel frequently to the island or don’t want to rely on third parties.

Trump’s administration has taken more than 200 measures against Cuba in recent years, including limiting trips, barring cruise ship visits and limiting remittances to $1,000 per person per quarter.

Those have been a severe blow for many on an island whose tourism industry was devastated by the pandemic and which has seen long lines for food and fuel and related shortages throughout the year.

One of the newest sanctions-hit Western Union by banning its Cuban partner company, Fincimex, from handling remittances because of its ties to the military-run company Gaesa. U.S. officials accuse Cuba’s military of supporting Venezuela and systematically violating human rights.

Cuba’s government has refused to use a finance company not associated with its military, and Western Union’s effort to find a way around the sanctions was to no avail.

John Kavulich, president of the New York-based US-Cuba Trade and Economic Council Inc., said that while US President-elect Joe Biden is expected to eliminate the cap on remittances next year, it’s unlikely he’ll allow Western Union to use Fincimex so as to avoid angering a bipartisan group in Congress.

And even if that does happen, Orozco warned it’s not easy to lift existing sanctions or impose that kind of change quickly, adding that it would take a minimum of six months.

Andy Gómez, a retired professor of Cuban studies at the University of Miami, said he doesn’t believe Cuba will be a priority for Biden given all the domestic issues weighing down his agenda.

“I’d say Cuba is not on the list,” he said. “What national interests are there in Cuba that has a positive impact in the United States? Absolutely none.”