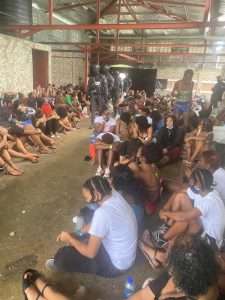 (TRINIDAD NEWSDAY) – HUNDREDS OF people have been detained in a major police operation in Kelly Village, Caroni, after the officers crashed what they described as an illegal “zesser” party in the early hours of Sunday.

The operation, at River Branch Trace, off the Caroni South Bank Road, went into effect in the wee hours at a warehouse where the private party was in full swing.

The people at the party are from different areas across the country and police information may lead to gang profiling of some of them.

Police said they received information from residents about the party, which is in breach of the covid19 regulations. They said it was being hosted by known gangs in the area.
The regulations prohibit gatherings of more than ten people, and the group was not adhering to the physical-distancing rules.

Police said several guns were seized and they were searching for more illegal items up to 8 am.

Residents said the area is controlled by a known gang leader who is involved in major crimes and who has operated for many years under the protection of corrupt police officers.