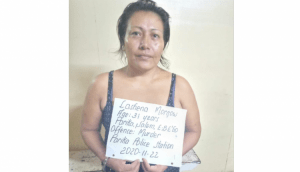 (GUYANA NEWS ROOM) – A Parika, East Bank Essequibo woman has been charged with murder after she stabbed her brother Sunday evening during a heated argument when she tried to stop him from beating his reputed wife.

Dead is fisherman Alex Morgow, 20, of Parika backdam. His sister, 31-year-old Lashena Morgow was arrested by Police. She had the knife she used to kill her brother in her handbag.

Police reported that Morgow’s wife, Joyann Atkinson, left home to go to the market with his sister, Lashena Morgow, and her son, 7. After the market, they went to Lashena’s home at Parika First Koker and she, Lashena, started to drink Guinness.

After about two hours, they left for Morgow’s home. When they got home, Police said Morgow had an argument with his wife over the food she prepared for him. He then proceed to push his wife to the ground and started to slap and kick her.

Lashena then intervened and ended up arguing with her brother, during which he pushed her.

Lashena then ran to the kitchen where she picked up a black handle knife and rushed back to the deceased where they continued arguing.

Lashena then dealt her brother one stab to his left side chest. Police said he stumbled outside and fell.

The Police were called to the scene and Lashena was arrested. She was found with the bloodied knife in a black and white hand bag she was carrying.

Morgow was picked up and taken to the Leonora Cottage Hospital, where he was pronounced dead on arrival at about 20:33h.