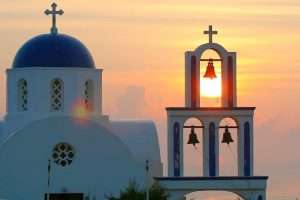 (AP) — Police interrupted a Sunday Mass in a northern Greek village and fined a priest 1,500 euros (US$1,780) for allowing two people to attend the service.

They also arrested the priest’s 30-year-old son and one of the two worshippers, who they said attacked the police officers.

The priest had been urging parishioners to attend, despite a ban, saying, “You’re either with Christ or the coronavirus.” The two attendees were from a neighbouring village.

Authorities are strictly enforcing a lockdown and nightly curfew after a recent surge in COVID-19 cases. In the northern city of Thessaloniki, where most cases have appeared, an 18-year-old university student was given a 6-month suspended sentence and fined 3,000 euros (US$3,560) for hosting her birthday party, which police raided at 1.30 am Saturday. The six guests were fined 300 euros (US$356) each.

Health authorities announced 1,498 new coronavirus cases Sunday, along with 103 deaths, five less than the daily record set Saturday. The number of confirmed cases since the start of the pandemic is 91,619, with 1,630 deaths.