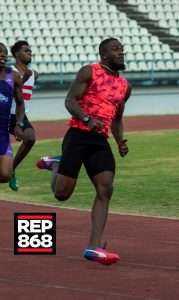 A police report said that at around 12.15 p.m. a motorist saw Patrice kneeling on the roadway.

The motorist stopped to help and called the police emergency line.

Minutes later, Patrice collapsed on the road, and died at the scene.

The motive for the killing is not yet known.

Condolences have poured in online as news of his death circulated among the relative, friends and sport fraternity.

Social media site TTgameplan posted a photograph of Patrice in action at a competition at the NAAA Series Four track meet, held at the Larry Gomes Stadium, Arima, on February 8.

TTgame plan wrote on Facebook on Thursday, “TTgameplan wishes to extend our sincere condolences to the family, friends, teammates and loved ones of #TeamTTO athlete, Josiah Patrice, who was shot and killed at Reform Road, Princes Town this afternoon.

The photo above was taken at the NAAA TT Series #4 meet, at LGS in February of this year, where Josiah had set a new PB (personal best) in the 200 metre event. Jah Love preserve his soul. Selah.”